Registration Process:
I find the reg process quite weird - I registered online via the SM Tickets website. I thought that was it after I made the credit card payment. But no. After reading my confirmation email, it turned out I just received a claim voucher, which I should print and bring along with me to an SM Cinema branch, to get my race kit claim stub. That claim stub, I should bring with me during race kit claiming period. Quite a hassle if you ask me.

The route was quite tough, with the usual Kalayaan flyover and the dreaded hilly part of Lawton Avenue. Actually, I didn't know what to expect of the race. I knew I was on recovery mode post-LU2TA, but at the back of my mind I wanted a strong finish. The race had a number of running teams vying for the fastest group category. The speed of competing runners will be contagious.

I initially paced with Syril during the early part of the race, though he went ahead as I could not catch up with his usual "fast start" pace. I usually "warm-up" after the first 3 to 5 kilometers.

Feeling strong and in good race condition, I picked up my pace. The weather's cool and it's not that crowded. Again that little voice inside my head is saying it's a good day for a PR. My Soleus GPS watch no longer locks a signal so I can't even monitor the distance nor my pace. I just had to keep running and hope for the best.

With a 4am race start, I was surprised to approach the finish line with the sun not even fully up, which only means one thing - I finished fast. And ecstatic I was as I saw the timer displaying 1:48! My dream sub-1:50 finally became a reality! A recovery 21k run turned 21k personal best! TYL!

Post-Race:
I had some time to stroll around with still a few people at the race village. Grabbed my lootbag (with the finisher medal inside), and then went back to my car to change and get my camera. After my usual social media update, I walked back to the race village for the usual meet-up with friends. And so let's go on with the photos:

Lesson learned: A DNF in a race should never dishearten anyone. You can try again and come back stronger. 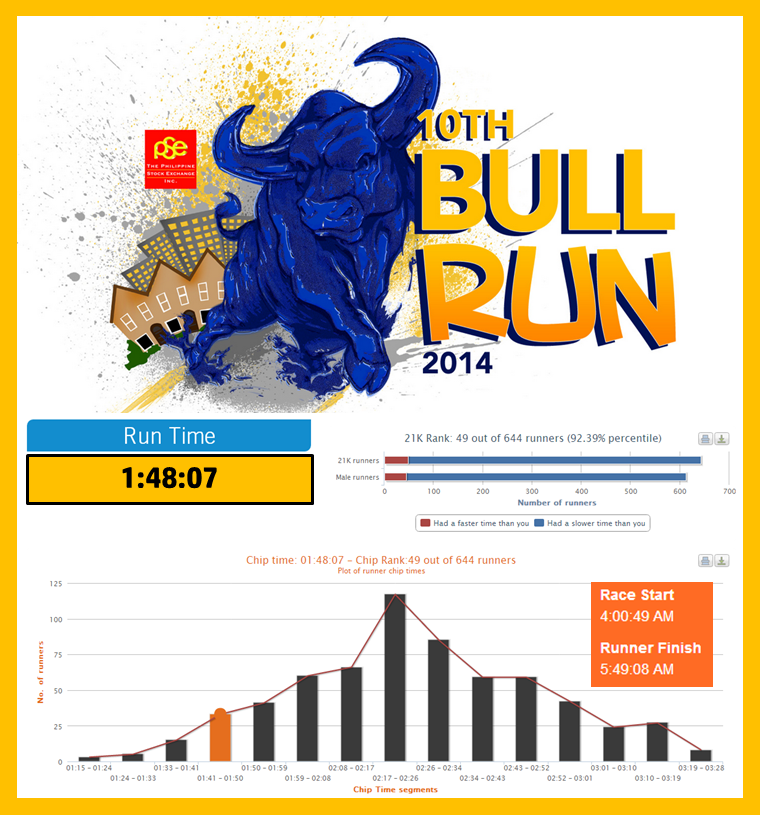 Kudos to Philippine Stock Exchange, Inc for staging the race's 10th edition.
Posted by deemenrunner at 6:11 AM