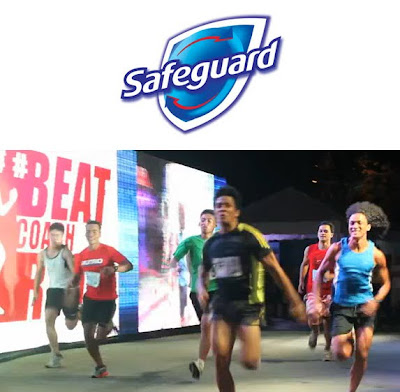 Last June 5, Safeguard Active sponsored a unique running event in Bonifacio Global City. Coined #BeatCoachRio, this event tested the speed of runners in their attempt to beat Coach Rio's 2.3-second 20-meter dash. Runners had two chances, and their best (and fastest) would be their recorded time.

The rain did not stop runners from attending the event, and it came to a point wherein participants had to run in batches to save up time. In the end, the top 5 runners competed with Coach Rio, with JP Sabido being the ultimate runner beating our favorite coach.


Of course I did not miss the opportunity to have my pic taken with Coach Rio in the event photo booth!

And of course, the usual fun hang-out with fellow bloggers!

Oh I forgot to mention, I did not even attempt to wear my running gear going to the event since I sort of guessed what the event will be like. I just knew I couldn't beat Coach Rio. So hats off to the one who beat him!
Posted by deemenrunner at 12:41 AM 1 comment: 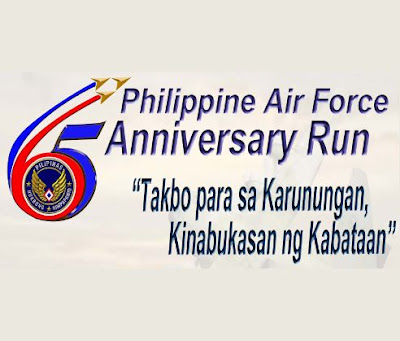 The Philippine Air Force, on its 65th anniversary, will be holding a fun run this 24th of June. I wasn't able to attend the launch of this event as much as I wanted to, because of work schedule conflict. I like to promote this event though, as my dad's a retired Colonel of PAF. 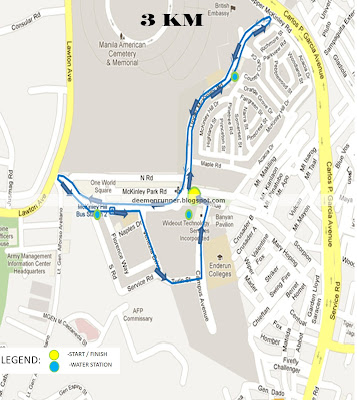 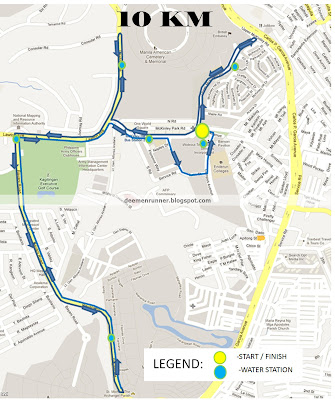 With the feedback I got from last year's Brooks running event, I was a bit hesitant joining this year's edition. Remember the finisher medal made of wood with a smiley sticker on it? Google it if you haven't seen it yet. Hehe!

But since there are no races slated for June 3 offering 21k other than this, and I'm on marathon-training-panic-mode, I opted to register for Brooks Run Happy 2. I particularly liked the bib design, and even the poster font too! Kinda cheesy, but the design made me feel "happy" in a way.

I and my Team Alpha1 teammate Joric (aka redcapguy) agreed to do a pre-run. Since the gun start was adjusted from the originally announced 4:30am to 5am, we'll cover more distance before the actual race. We started running around 4:15am (we invited Jesy aka sprintingswine but he was too lazy to run yet), going around the BGC area. After our 2nd loop, we heard the emcees announcing the gun start for the 21k runners. We entered the assembly area passing by the back of the event stage just in time to catch up with the tail end of the 21k runners. By this time, I checked my Soleus GPS watch and we already ran 7 kilometers.

Within the first kilometer, we caught up with Jesy and Daves. Jesy joined me and Joric, and we left Daves who paced fellow blogger CJ aka runadoboking. I told Jesy we were on LSD mode and had no intention of racing. During the course of the race, I kept reminding Jesy to slow down as he has the tendency to lead using his quicker race pace. Most of the time we were on "kwentuhan" mode which I really enjoyed because there's not much pressure when we're not too competitive in a race.

I was surprised I was still running strong during the latter part of the race. I even registered my fastest pace during KM27 (KM20 of the event). It seems like I'm getting my groove back. Yay!

We clocked in at 2 hours and 15 minutes. Joric and I ran a total of 28 kilometers in 3 hours. The event was great. I ran happy.

Race Likes:
- Plenty of hydration (and ice-cold too!)
- Lots of marshals along the route
- Ambulance at key points. There's an ambulance at the Buendia flyover as well. Good location!
- Kilometer markers with the "happy" font.
- Nice finisher medal (waaaaay improved compared to last year's)
- Plenty of loot! I particularly liked the "Born a RUNNR" pin

Improvement areas:
- 15km marker facing the wrong direction (corrected at a later time though)
- Lousy loop cords - they won't even fit my hand! Did they use a child's hand as basis? LOL!

Until next year!
Posted by deemenrunner at 3:05 AM 2 comments:

And the RU2 Free Race Kit Winners Are... Expect an email regarding instructions on when and where you could claim your race kits.

Non-registered runners still have a chance to head to their nearest RU2 registration centers until June 10, 2012.

Special thanks to Coach Rio Dela Cruz and Vima Mendoza (Kulitrunner) for this contest opportunity! 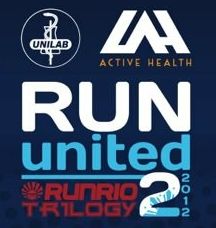 With a few days left before the much-awaited Unilab Run United 2 event, everyone's getting more excited. The biggest number of 21k runners and the anticipated race expo are just some of the things I'm looking forward to.

Just leave a comment on this blog entry with the following details:

You have until June 6, 10am to submit your entry. One entry per person only please. Winners will be announced on the same day and further instructions will be provided to the winners on how they could claim their race kits.

Posted by deemenrunner at 12:06 AM