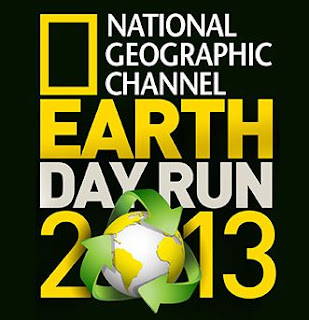 12,000 runners. 36,000 trees. This year's edition of the NatGeo Earth Day Run is its biggest yet. I was amazed at runners' clamor to participate on the race, with kits selling out even before the registration deadline. The promise of planting three trees for every registered runner was probably the event's biggest selling point. And how cool are the singlets with the yellow portrait frame?

Fresh from last week's Sole Racing, with my body feeling great after doing that sub-2 half mary, I felt confident that I can attempt a sub-2 again. The last time I did a back-to-back sub-2 was way back December 2011, and it would sure give me a boost if I could do a repeat.

I'll also try something new on this race - I won't take GU Roctane and I won't apply Bodivance - two of the things I always do on a 21k, and see how it affects my performance.

Early again at the assembly area, I met runner friends (my running buddy Ryan, who'll take it easy and just do an LSD, Rom and Joshua, who were about to pace with me, and officemates PB and Fez who are doing their first 21k, to be paced by Marte). In just a matter of minutes, the area was filled with 21k runners.

Strategy is to do what worked in Sole Racing - start slow, build up speed and run fast midway, and do a slower but steady pace at the end. It paid off, and I finished in 1:57:48, a minute faster than last week's! Woot, woot! Lesson learned: I don't need Roctane nor Bodivance. Just kidding!

Some race notes:
+/- I love the race route - it was the classic 21k route utilizing Bayani Road and its killer rolling terrain. However, the 21k distance seemed lacking by 200-300 meters. I got the same feedback from fellow 21k runners who had GPS watches.
+ It was announced earlier that the race would not use plastic cups due to its Go Green advocacy. However during race day, there were plastic cups on hydration stations. Had they not changed their hydration strategy, it would have been a disaster especially with the volume of runners and the heat that day. So good thinking on the organizer's part! It was nice to see a number of runners who brought their own hydration bottles (I did too!) so it sort of minimized waste on the road.
+/- The organizer tried their best to keep the race village in organized sections as possible - separate section for claiming of sports drink, another section for finisher shirt, a separate one for the loot bags and one for the race certificate claiming. I'm lucky enough to finish the race early and claim everything without queuing, but the situation changed with the influx of runners. Long lines for everything. And with the sweltering heat, runners became agitated. Most disastrous place is the baggage area, wherein runners were already allowed to enter the restricted area and get their bags themselves, which was already prone to theft.
+ I love the Illest finisher shirt, just the design I wanted.

Overall, organizer Event King did the best that they could given the expanded scale of this year's Earth Day Run. Yes, there are quite a few improvement areas here and there, but the race advocacy outweighs them all, in my opinion. I was glad I participated and able to help in my own little way. Bring on EDR 2014!

Official results are posted at http://www.strider.ph/races/56
Posted by deemenrunner at 4:50 AM 2 comments: 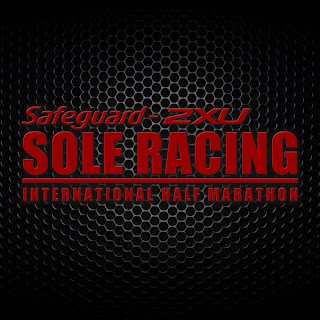 With the running boom nowadays, its very difficult to be part of a race where you wouldn't push, shove and squeeze your way through a sheer number of runners. Runrio's Sole Racing last April 21 is one of the few intimate races every runner dreams of.

The 3-day race kit claiming event happened at 9th avenue, Bonifacio Global City. The claiming was quick and well-organized; took me not more than 5 minutes to get my hands on the tote bag containing my race bib, hydration bottle, 2XU calf compressions and some goodies from Safeguard.

With an early 4am gun start, I was at the venue before 3am to get a good parking slot. I had time to warm-up and meet with fellow bloggers and runner friends. Noticed a lot of security and bouncers at the assembly area. With the recent Boston Marathon bombing, I expected security measures will be increased. There were even a number of security personnel with accompanying bomb-sniffing dogs! Marshals were strictly checking runners' race bibs and if they're carrying a hydration bottle with them.

As expected, a lot of photographers were walking around and documenting the event through their cameras. We were camera-ready, of course.

After the national anthem and a short prayer, runners were then briefed on the race route, which made good use of BGC's streets before heading out to Buendia flyover then back. The route was quite a challenge due to its many turns.

As we were sent off, I couldn't help but complain on how humid it was. HUMID. I was sweating like there's no tomorrow but I was feeling great. I had my hydration bottle on my left hand, trying from time to time to switch it to the right but for some weird reason, I prefer to hold it with my left hand. Rolly and I were pacing each other at the first few kilometers of the race, but I was eventually on my own the latter part.

The best part of the race is how clean the race route is all throughout. There were no wasted hydration cups on the street. Hydration stations were manned by marshals carrying pitchers (of water and Gatorade) and runners just had to refill their bottles. Marshals were even kind enough to pour water on runners' heads to cool them down as they pass the hydration stations.

I kept a constant pace and my strategy was I would not look at my GPS watch and just surprise myself at KM20.

With 3 kilometers left, Runningshield Patrick Concepcion passed by with his usual negative split pace. He made me eat dust again. Haha!

Upon seeing the KM20 marker, I looked at my watch and it registered 1:53. I can do a sub-2! Yay! I took it easy since I knew whatever happens, I can bag that sub-2.

I crossed the finish line with an official chip time of 1:58:54.

Another great thing about this race is how intimate it was. With only a thousand runners in attendance and only one race category of 21km, it was easy to bump into a familiar face every once in a while. And I only have the photos below as proof of how many friends I met during that day.

We had our post-race breakfast at Banapple Market Market.


2 days later, official race results were released. I ranked 97th among 977 runners, which translates to top 9.9% overall. Happy with my results! 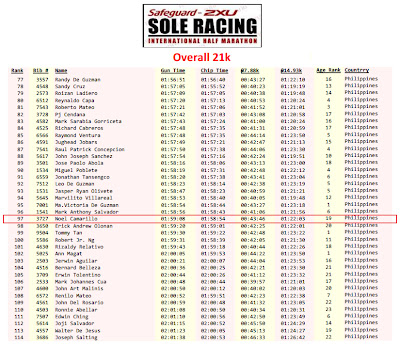 Leg 2 of Sole Racing happens on the 18th of August.
Posted by deemenrunner at 3:45 PM No comments: 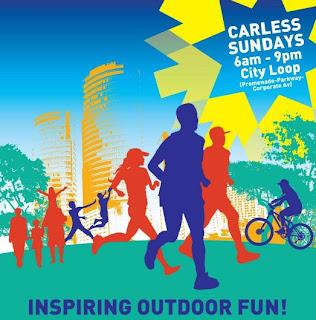 (From the official press release) Filinvest City, Gearing up For An Action-Packed Summer!

It’s that time of the year when schools close down, the sun rises extra early and sets later than ever. Yes, it’s summer once again and there is no better place to play than in Filinvest City, where action and adventure can be found in every corner!

For its growing running and biking community, Filinvest City gives more reasons to hit the streets as it implements Carless Sundays allowing these enthusiasts to freely use the city’s tree-lined avenues for their favorite workout from 5 am to 10 am. During this time period, The City Loop, running from one side of Corporate, Commerce, Parkway and Filinvest Avenues, will be closed off while the other side of these streets will accommodate two-way traffic.

These runners and cyclists will also be able to experience the unique thrill of conquering the rugged terrain in the newly-expanded 9km bike/run trail within Filinvest City. And to aid running and bike aficionados to take their game to the next level, trail running and biking clinics will also be hosted.

Already, racers are eager to test their mettle against one of the toughest physical trials known to man, the Xterra Mud Run, an off-road marathon that will take place at this newly opened bike/run trail at the end of May.

All these can be experienced in complete safety thanks to round-the-clock security, and can be accessed with relative ease as transportation points are also operational 24/7.

Anyone who’s looking for a summer to remember doesn’t need to go far. At Filinvest City, the action is always sizzling hot and the fun is just yours for the taking!

Filinvest City, a mere 15-minute drive from Makati, is a prime development of Filinvest, a leader in property development for over 50 years. Guided by the Gotianun family tradition of integrity, quality and service, it forges ahead with renewed dynamism. For more information on Filinvest City’s special events, call 846-0278 loc 7093 or visit www.filinvestcity.com. Like us on Facebook: FC.inspiringpossibilities.
Posted by deemenrunner at 2:55 PM No comments: 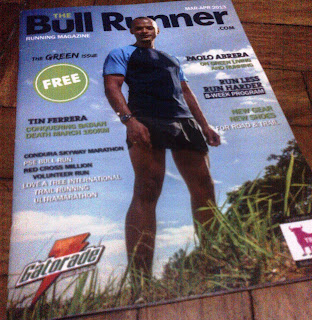 Grab a copy of The Bull Runner Magazine March-April 2013 issue (with Paolo Abrera on the cover) and you'll see yours truly featured on the Condura Skyway Marathon event page! 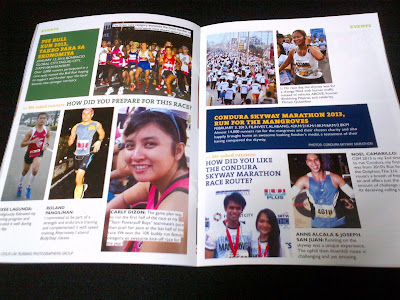 I got asked: "How did you like the Condura Skyway Marathon race route?" of which I replied: "CSM 2013 is my 2nd time to run Condura, my first was from 2010's Run for the Dolphins. The 21k route's a breath of fresh air, and offers just the right amount of challenge with its deceiving rolling terrain."

Thanks to Mommy Vimz aka Kulitrunner for having me featured!
Posted by deemenrunner at 12:30 AM 2 comments:

SAVE THE DATE: Adidas King of the Road on July 7 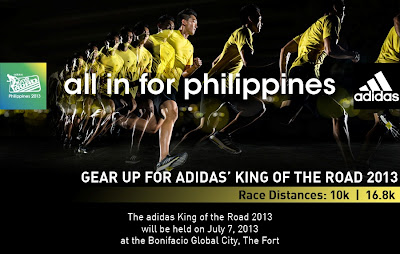 The Philippines is all in for the 2013 Adidas King of the Road happening on July 7 at Bonifacio Global City. The highly anticipated race event will feature 10km and 16.8km categories.

Watch out as more details are revealed very soon.
Posted by deemenrunner at 8:17 PM No comments: 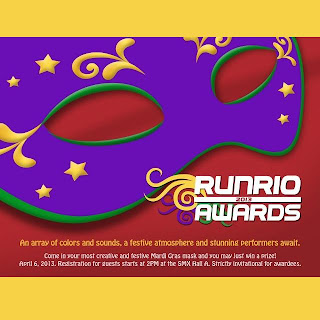 Last 2012, I was fortunate enough to be invited to join the Runrio Awards Night (I blogged the experience at this link.) Since then, I dreamed of being an awardee so that I may have that moment on stage when I shake the hand of Coach Rio for being one of his loyal trilogy runners.

Fast forward to April 2013 - I got an invite to attend this year's awards, not as a blogger, but as an awardee.   The Mardi Gras-themed celebration was held at the SMX Convention Center.

We arrived early at the venue so we waited for quite some time for the other guests and awardees to show up.

Looking forward to completing this year's leveled-up trilogy and hopefully, becoming an awardee again next year. Thanks Runrio and Unilab Active Health for coming up with a once-in-a-year event when runners meet without having to wear our usual running gear. Cheers!
Posted by deemenrunner at 4:36 AM 2 comments: 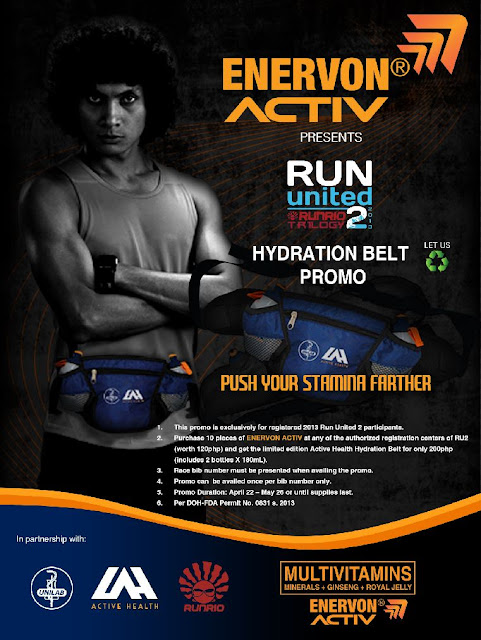 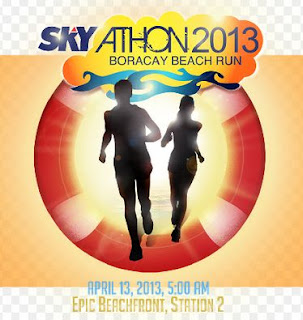 It's Skyathon's 4th edition and my 3rd year running the event (missed one when I had a 3-month business trip). It's the same old formula - travel to Boracay, stay in a nice hotel, relax, claim the race kit, run the race, attend the post-race party, relax some more before heading back to the metro.

The best way for me to share my Skyathon experience to you is through photos, so here goes:

Next year, Skyathon turns 5! Anticipating it to be bigger and better! I also hope they return timing chips and get rid of manual timing next time.
Posted by deemenrunner at 11:23 AM 7 comments: