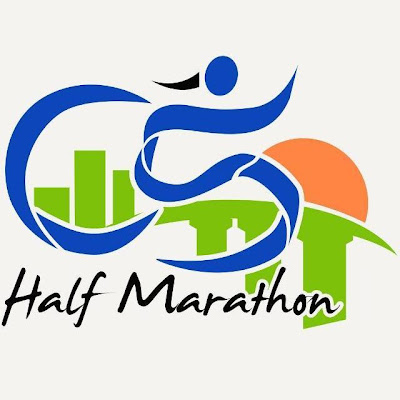 Having joined the AXN Runs Philippines last year, I only had high expectations from Finishline's C5 Half Marathon event. This year's event got me sold with the nice finisher shirt and cool-looking finisher medal (which are the only positive things I could say about the event, honestly). Sad to say though, the organizers did not focus on the more important race event aspects.

RACE KIT DELIVERY DISASTER. Whenever registering for a race wherein I don't get the race kit instantly, I feel there's always a risk of something going wrong. The registration form clearly stated race kit deliveries will be made from May 21-25 (Monday to Friday). My race kit arrived May 26. A lot of registered participants were anxiously waiting for their kits to arrive. I read forums with a lot of irate runners who have not received theirs. There were even threats of reporting Finishline to DTI (which is already too much, I think). My Team Alpha1 running teammate Daves never got his kit delivered. There's a lot of finger-pointing happening - with Finishline blaming courier IRIS for not being able to handle the deliveries and IRIS saying kits were sent in late by Finishline, hence the delays. Now who's saying the truth?

RACE DAY, BAD DAY. While waiting for our gun start, there was an announcement from the host that there would be a race briefing from the race director Vince Mendoza. It turned out that the race route has been changed last minute. And it's not just any minor modification, mind you. Instead of the promised published race route (same as AXN's last year which covered a long stretch of the C5 road), 21k runners will only be running a shortened path of the C5 road, and will have to do two loops! WHAT THE HELL! I did not sign-up for this! This event should have been called "Half C5, Half Marathon!" I'm not sure if it's cost-cutting on the organizer's part, not being able to meet the quota runners. But then again, it even made me question more if the 1000-peso registration fee I shelled out was worth it. [SPECIAL MENTION: Dead rat at km3. 21k runners had to bear passing this big dead rat 4 times due to the race loops. I wish I had my camera with me so that I could post a pic of that rat here. Haha! Off-topic.]

At the km17 water station, cups ran out. I had to use the water container lid just to hydrate. I even heard plastic cups were just being recycled by the marshals.

I'm still hoping Finishline will be able to release an official statement regarding the events that transpired. A public apology perhaps? Now's the perfect time to do damage control, else they'll lose runners on their succeeding events. It's just so disappointing that they're falling way back as far as race organizing is concerned. Expensive yes, but so not worth it.


By the way, I'd like to thank my teammate Jesy for pushing me to finish the race. He paced me during the 2nd loop. I came all the way from Laguna for a company outing, drove straight to Ortigas at the wee hours of Sunday morning without any sleep whatsoever. He was literally pushing me during the uphills. Sorry Sprintingswine for ruining your fast race records.

The graph below shows my abysmal race performance.

Next race: Brooks Run Happy on June 3. Hoping for a better race experience there.


First of all, I like to apologize for the inconvenience last weekends race may have caused.


I’d like to take this opportunity to share with you the stories behind the several issues. The intention is not to justify any of them.


Registration Fee is too high –
We’ve always wanted runners to experience challenging course like running at C5. Unlike last year, this year’s C5 Half Marathon was funded by us runners. All the expenses from staging of the race, producing the technical tees, timing chip are all paid for by the participants and us organizers. In many big races, these costs are taken cared of by the sponsors. We set the registration fee at the current level for us to cover your requirements including staging, delivery cost, manpower, cost of sports drinks, water, imported medals, imported singlet and finisher shirt fabrics. There is not a single cash sponsor. We are grateful for those sponsors who donated their products as prizes and freebies. We are very thankful for them.


Early deadline for regular registration
The reason why set the registration deadline early is for us to produce the size you prefer and only the quantity that is needed. This is again related to us not having any corporate sponsors who normally pay in advance the production of singlet, medal, finish shirts, and operating expenses.


Delivery of race kits
For the runner’s convenience, we decided to have the kits delivered to all metro manila residing runners. It was however unfortunate that we tapped a courier whose operation was not designed to handle our requirements.


Last Saturday, I had to personally visit our courier’s office at 1:00AM to check how many kits are still pending for delivery. At this point, I had to make the decision to pull out the remaining kits and have it picked up instead.


Missing Race Kits
RUNNR has always been a very supportive partner. We are responsible for all the runners who paid for this event regardless whether we received your payment from our registration site or not. This is the reason why we decided to give out race kits despite not having received payments and entry forms.


Change in race route
The changes in race route were decided only last May 25 after our last coordination meeting with different government agencies. Unlike last year, our gun start for half marathon this year is earlier. The uneven road condition along Eastwood combines with unrepaired lamp post pose a danger to many runners.


We were supposed to announce it last Saturday (May 26) but we were consumed with addressing the race kit delivery concerns.


Late gun start
I have to make sure that the roads are all clear before starting the race. I made a decision to delay the gun start until all vehicles passing through C5 are re-routed. I hope you understand that C5 is such a major road and closing it sometimes takes more effort.


Lining up at the finisher shirt tent
We allotted two tents for the finisher shirt tents, one for regular and one for late registration. All regular registered participants were supposed to get their preferred size (bib with R) in one tent while late registrants (bib with L) sizes are on a first come first serve basis at the other tent. Because we released new race number to those who were not able to claim their kits, this caused confusion to many. Runners who originally assigned a different race number is now wearing a new one which may not match the race number in the finisher shirt. Nevertheless, we were prepared for this and had extra tees unlike last year.


15km short by 3km
After investigating, I personally found out that it was indeed our marshal who directed the 15km runners to take the u-turn during the first loop.


Race Results
Please give us time until tomorrow to release the results. We are in the process of consolidating the changed in race numbers, especially to those who were given new race numbers during the race.


We hope that you will continue to support us as we strive to be better in all aspects of our race.

15k Turned 21k at the Ensure to Endure Run 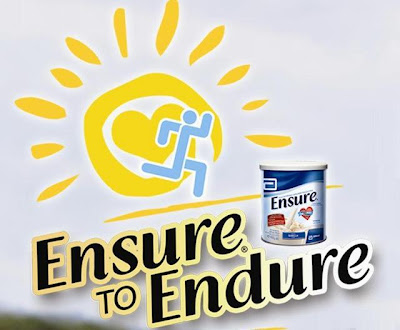 True enough, Entraineur's Ensure to Endure Run is like any Runrio-organized race event - high quality. The only difference is it's a smaller and a more intimate event, which I really enjoyed.

Last May 20, me and Barefootdaves agreed to extend our 15k race by doing a pre-race run (and a post-race depending on our after-race mood :p), and targeted to run a total of 25k to 30k.  We met around 4:30am and started running around BGC and McKinley. The 15k gunstart is at 5:15am but since we're on LSD mode (or kwentuhan mode), we knew we will not make it back on the starting line on time.  We were not on race mode anyway so it's ok. After 40 minutes of pre-race run, we approached the starting line arc. We heard the hosts doing a countdown for the 10k race participants so we just joined them as they were sent off. It was easy to squeeze our way in the crowd since it was not too big of an event.

My last run was April 21, 5k at Boracay. I had no mileage so fatigue came early. We were just doing an average of 7 min/km pace but I felt my body could no longer attain our target distance. We decided not to continue with a post-race run amid the great weather; we already did 21k anyway, which was good enough. Hungry and tired, I was also too excited to have a hearty post-race breakfast.

Here are some observations on the event:
- Hydration is overflowing - both water and Powerade. Hydration station locations are also well-placed. There are more stations on areas where 5k, 10k and 15k participants merge.
- There were a lot of race marshals manning turning points and U-turn spots.
- Less crowd, more road space for running, more fun!
- Mom's happy with the Ensure product giveaway for the race finishers.

Great event from Entraineur! Everyone's happy! Looking forward to more events like this. 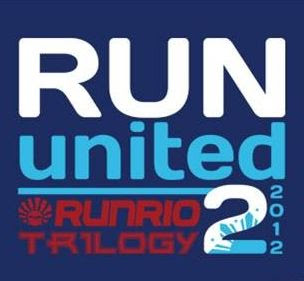 Thanks to everyone who participated in my Blogaversary Unilab Run United 2 21k race voucher contest. Via randomizer.org, the three lucky winners were chosen.

And the winners are:
Congratulations!  Winners will be notified via email/text on how to claim their race vouchers.

Registration for Unilab Run United 2 is still open. You may view the registration details by clicking this link.
Posted by deemenrunner at 6:56 PM 2 comments: 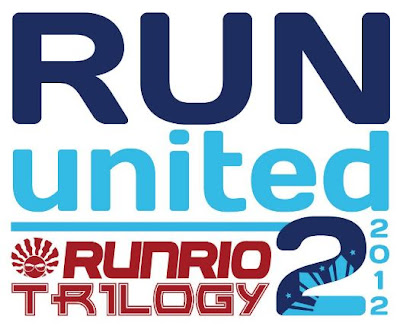 It's my blog site's 2nd anniversary on May 9, 2012! Whew time really does fly fast when you're having fun. Lots of new runner friends, cool bloggers and a supportive running team! With one of the biggest race events coming this June, I'd be giving away three 21k race vouchers* for Unilab Run United 2! It's sort of my birthday treat as well to the three lucky blog readers (I celebrated my birthday last week BTW.)
* Race voucher which you'll just present in Riovana for you to be registered in RU2

You have until May 15, 2012 (Tuesday), 5pm to join this promo. One comment only per participant please. Winners will be drawn afterwards via RANDOMIZER.ORG and will be announced on the same day. Winners will be emailed/texted with details on how to claim their vouchers.

Thanks to Ma'am Vimz aka Kulitrunner and Dada Teves of Runrio for helping me secure the race vouchers.

UPDATE: Contest is officially closed (May 15, 5pm).  Thanks to everyone who joined and for all the greetings.

Posted by deemenrunner at 5:46 PM No comments:

The De La Salle Alumni Association once again brings you One Run, One Family, One La Salle, now on its third year. 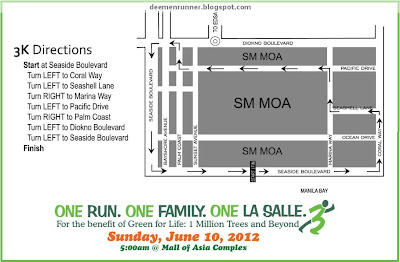 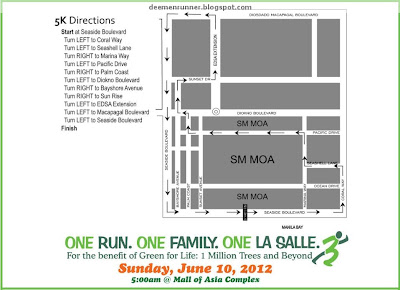 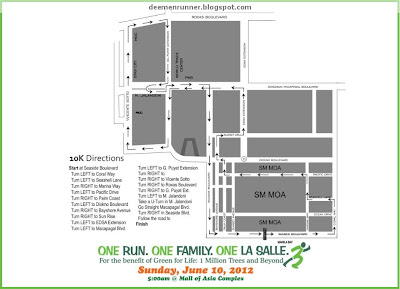 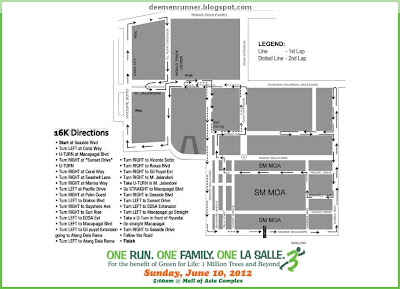 Race Beneficiary:
- Green for Life: One Million Trees and Beyond

Labels: dlsaa, dlsu, green for life, la salle, mall of asia, one million trees and beyond, one run one family one la salle, orofols 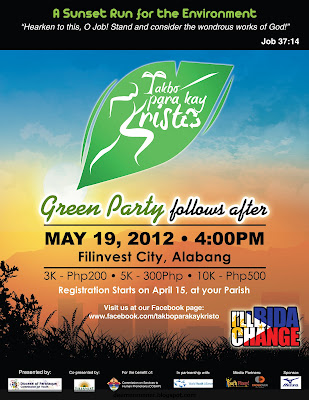 The Diocese of Paranaque Commission on Youth, with partnership with World Youth Alliance, brings you Takbo Para Kay Kristo, a sunset run for the environment. 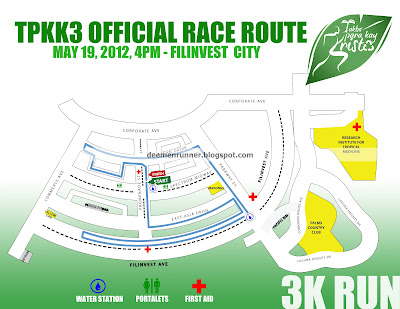 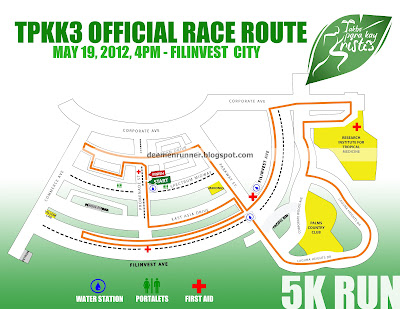 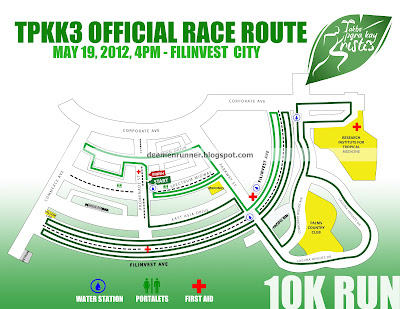 You may visit their Facebook page at www.facebook.com/takboparakaykristo for more details.
Posted by deemenrunner at 4:34 AM No comments: