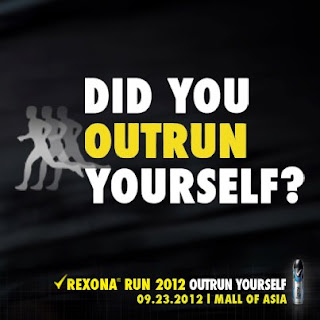 Just a week after my Afroman distance run at RU3, it's now time for another 21k run at Rexona Run 2012. This year's edition challenges runners to DEFY, SURPASS and OUTRUN themselves, by giving runners a special token if they do a sub-2 21k or a sub-30 5k.

Another promising addition to this year's race is having pacers for varying finish time targets, to push runners to their limits. The day before the race, I was seriously contemplating if I'm going to target a new 21k PR (meaning I have to join the sub 1:50 pacer, Mark Terrado) or just join my running teammate from Team Alpha 1 FFS, who's doing a sub-1:55 pace. I chose the latter, which I eventually regretted, as it required a 5:14 min/km pace. I only managed to follow this fast pace until KM6; I was too burnt-out.

I slowed down and did my normal pace, but I was having irritating thoughts of doing a DNF. I shrugged them off. Calculating my new pace, I knew FFS will catch up with me within the final 7 kilometers of the race (I'd at least manage to finish sub-1:55 if I could just sustain his pace). I tried to follow his lead when he passed by in the long stretch of Macapagal, at least for a kilometer or two. I needed to walk on hydration stations as I was splashing myself with water to cool me down. And with that, I was again left by another pacer.

At the final 2 kilometers, I saw a familiar runner - my friend from Team Titans Rolly. I handed him ice cubes I got from the last hydration station (holding on to ice cubes while running has a mental effect on my running performance, btw) and we paced until the finish line.

Some race observations:
+ I liked the race route - it's perfect to do a sub-2 on it.
+ Overflowing hydration - water, Powerade. There were hydration stations with mini-water bottles. They were easy to carry while running.
+ Lots of sponges.
+ Lots of bananas.
+ Large trash bins for hydration cups
+ Minimal runner congestion and merging of different categories. I felt like most of the time I was running just with 21k runners.
+ Great-looking finisher medal!
+ Everyone's happy with the (grocery) loot bag!
- The only improvement area in my opinion is on the pacers. They were literally invisible with the shirts that were provided for them. It would have been better if they have different colored shirts which stood out from the sea of blue runners. Or at least a balloon (which is used even for international races).


Finishing sub-2, I got the special token! I got keychain!

Another well-organized race from Rexona and Runrio! I wonder what the next challenge will be on Rexona Run 2013.
Posted by deemenrunner at 11:55 PM 3 comments: 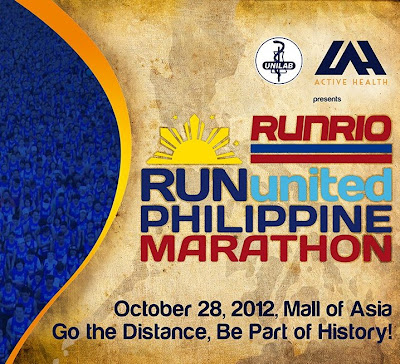 Go the distance. Be part of history! Join the 1st ever Run United Philippine Marathon (RUPM), brought to us by Unilab, Unilab Active Health (ULAH) and Runrio.

Take note of these important times:

And if you're wondering how your completed medal would look like once you assemble your Runrio trilogy finisher medals, here's a preview:

WINNER PRIZES
What are the rules on NATIONALITY?
You are a Filipino if:
- You are born in the Philippines (with valid birth certificate from NSO)
- Both parents are Filipino
- You are a foreigner who has adopted Filipino citizenship via naturalization

- Any participant/ winner who does not qualify under any of the above-mentioned qualification are considered a NON-FILIPINO RUNNER.
- A NON-FILIPINO RUNNER who is competing for the top 3 spot for any of the race categories is required to present their passport upon registration for verification otherwise his/ her winnings will be forfeited and the next in line runner will be considered as the winner. For FILIPINO RUNNER, a valid ID (SSS, Driver’s License, or NSO Birth Certificate) must be presented upon registration. 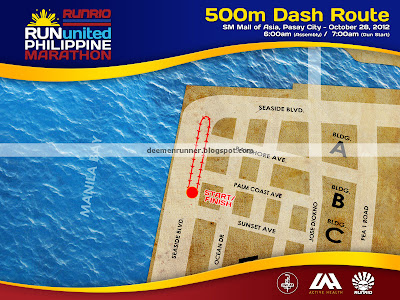 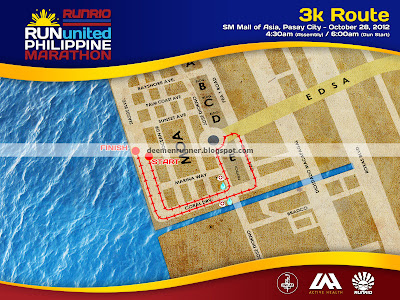 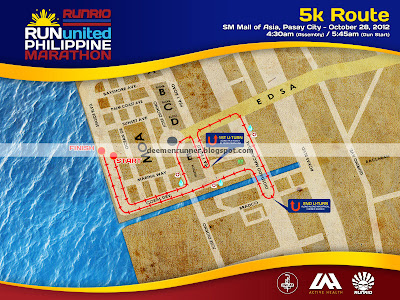 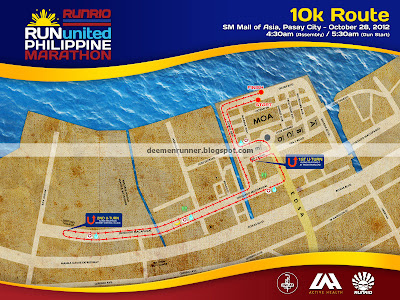 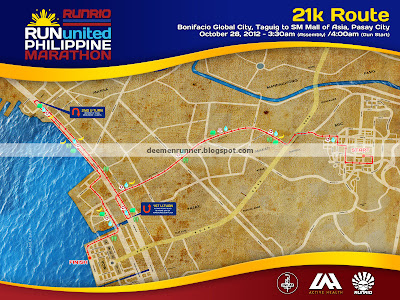 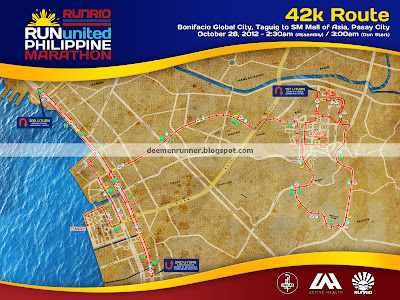 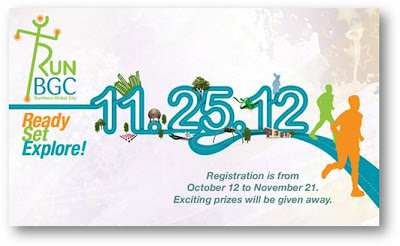 DETAILS SOON...
Posted by deemenrunner at 4:04 PM No comments:

Of Cats and Dogs and an Afroman Distance 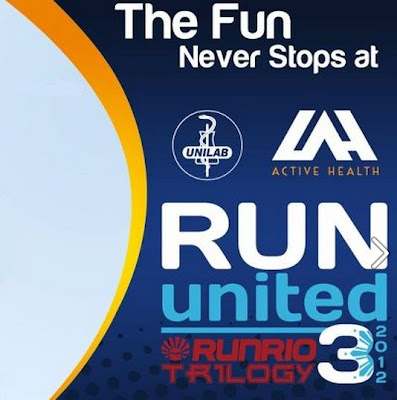 Not even the heavy outpour could stop the Run United 3 participants from running in the third leg of the Runrio trilogy. Amid the crazy weather, the event was still a big success, and I could now say I'm a convert of running in the rain.

Gun start of 32k runners was early at 3am. Unlike what I did last RU2 wherein I parked my car at Mall of Asia then took the shuttle to the BGC starting line, this time I did the opposite - I parked at BGC and made use of the baggage bus to bring my stuff to Mall of Asia. There were about 2800 registered runners in the Afroman distance, and everyone's excitement to complete the medal pie is just contagious.

I will be pacing my friend Ryan again, with a steady pace target of 6 mins per kilometer, or about 3 hours and 12 minutes of continuous running (my PR is 3:06 for 32k by the way). The race will maximize the roads of BGC before finally crossing Buendia flyover and head to Roxas Boulevard.

It was the wettest of all races I've ever participated in, and there were even times the strong winds were pushing us and slowing us down. We were basically on target until KM24, but the dreaded wall hit us KM25, and so we dropped to an average 7-pace on succeeding kilometers.

We clocked in at 3 hours and 25 minutes, shaving off around 40 minutes from Ryan's previous 32k PR. We were far from our original target, but that's still quite a feat!


Some race observations:
+ The addition of large labelled trash bins was a very welcome change to the race. It was now easier for runners to dispose of their cups after passing through hydration stations
+ Of course, hydration is overflowing (and with the help of the rain, some cups are being filled to the brim, hehe!)
+ Claiming of finisher kits was organized (however, there were some runners who weren't able to get the finisher shirts of their choice, but will be provided to them at a later date)
+ Baggage counters were organized as well. I got my bag without the hassle of a long queue.
- One area of improvement is the placement of timing mats along the race route - it seems that there are a lot of areas where runners could cheat and do a shortcut. This could have been planned better.

After changing to dry clothes, I stayed for a while to hang out with some Team Titan friends, and of course some photo ops.


And no race review will be complete without me plotting my race performance. Well, the red region says it all. LOL!


To my friends' surprise, after the 32k race, I headed back to Manila Peninsula for the wedding preparations of my sister. Haha! Here's a happy family picture:

Posted by deemenrunner at 12:53 AM No comments: 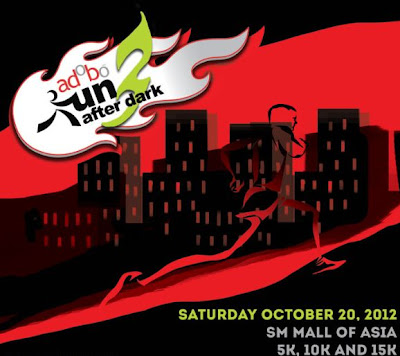 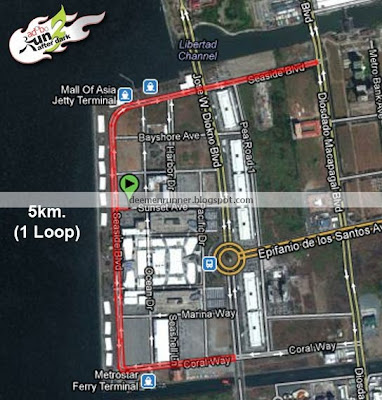 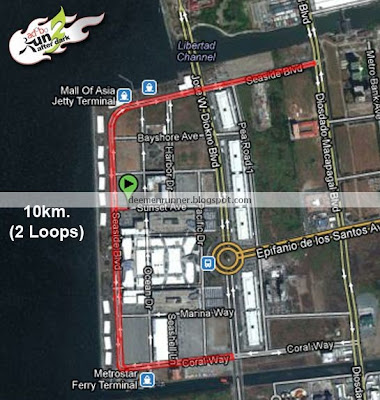 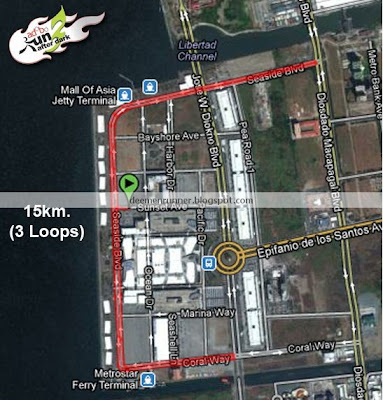 
ADOBO RUN AFTER DARK 3: THE PARTY WITH A RUN

Live music, fireworks, spectacular performances, free flowing beer… all the elements that make a great party.  And oh, did we mention that it’s also a run?

Prepare for a treat as adobo Magazine, the country’s premier advertising and brand communications publication brings you its third edition of adobo Run After Dark on Saturday, October 20 at the SM Mall of Asia grounds.  An estimated 5000 runners and party revelers get to celebrate their running feat with a full-blown party and live concert immediately after the race.

All fitness levels are welcome in the 5k, 10k and 15k race categories, with the first gun start firing at 6:30pm.

In keeping with the Halloween theme that has made adobo Run After Dark stand out as a fun and unique event, cash prizes are also awarded to the creepiest, wackiest and most creative costumes of the night.

And here’s the best part.  While having the time of your life, a needy home is being lit through MyShelter Foundation’s “A Liter of Light” program, which is the beneficiary of adobo Run After Dark for the second year running. 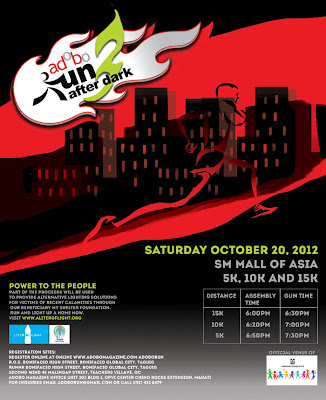 Posted by deemenrunner at 4:05 PM No comments: 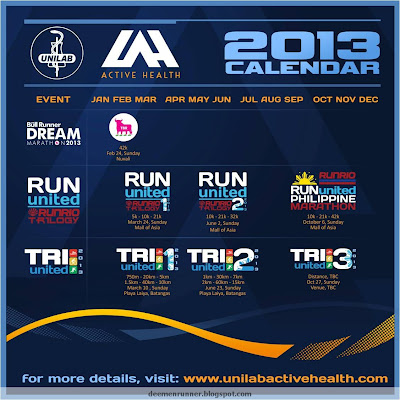 With the last quarter of the year coming in a few days, Unilab Active Health has already released their 2013 activities calendar, so that everyone living an active lifestyle may already plan ahead and block these important event dates.

For all runners, Run United Runrio Trilogy will be leveling-up next year! Save these dates:

Which can only mean Runrio Trilogy Awardees will be those who finished 21k - 32k - 42k! Woot! I'm happy with this!

For those who are into multi-sports, Tri United schedule is on the image above.

Start planning, guys! Aren't you just excited for 2013?
Posted by deemenrunner at 6:11 PM No comments: 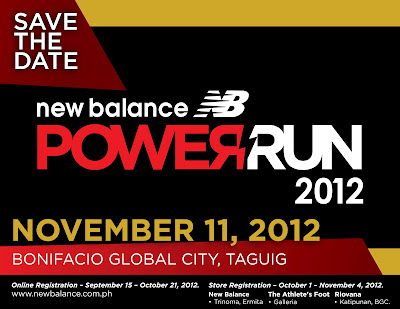 Get ready for 25k! Details soon!
Posted by deemenrunner at 10:39 PM No comments: 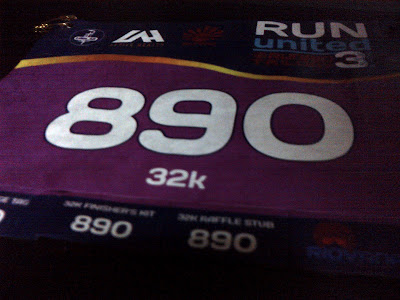 To the 2800 32k registered runners, good luck to us all! Hope this Sunday brings good weather and an injury-free run to everyone.

Oh and by the way, after the race, I'll be heading to my sister's wedding. I just couldn't miss running in RU3 that I had to get this in on my hectic weekend schedule.
Posted by deemenrunner at 7:54 PM 6 comments: 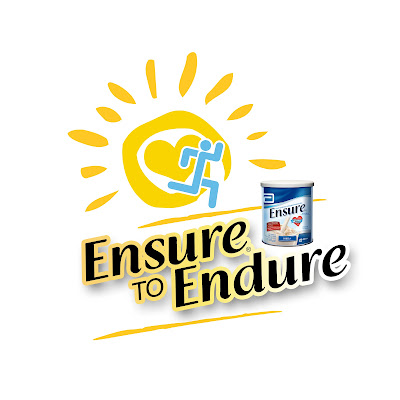 I definitely enjoyed the pilot race event of Entraineur - Ensure to Endure Run last May 20. Ensure will be holding its 2nd edition with the same registration concept - purchase Ensure products and use the receipt (single or accumulated) to register for the race.

Simply buy Ensure products with receipt date from September 1, 2012 to October 19, 2012 and present the receipt to register. Good news is that purchase requirement prices were lowered by 100 pesos as compared to leg 1 for all categories!

You may refer to below table on suggested retail prices of various Ensure products. As a sample, if you purchase Ensure Fiber Vanilla 1.8kg worth P2885, you may register three 15k slots.

Now where to purchase your Ensure? There are a number of nearby stores from the registration sites. Simply refer to table below:

All participants get a singlet and a bib upon registration.
Take note of these important times: 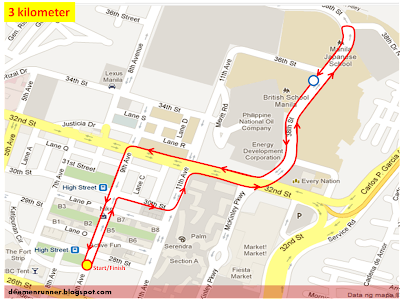 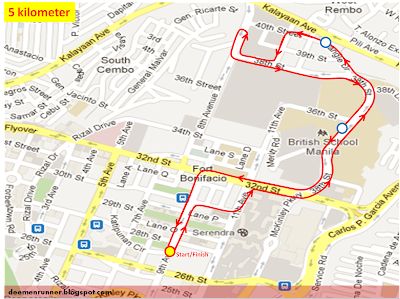 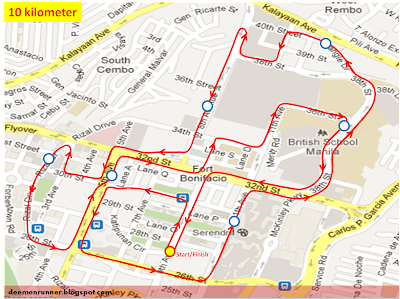 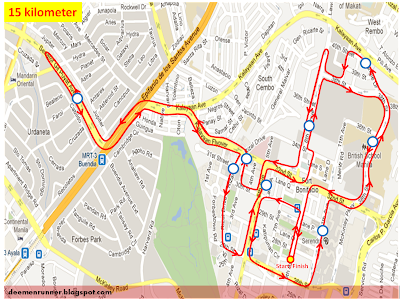 Get the strength you need to finish the race. Drink Ensure everyday. See you on October 21! 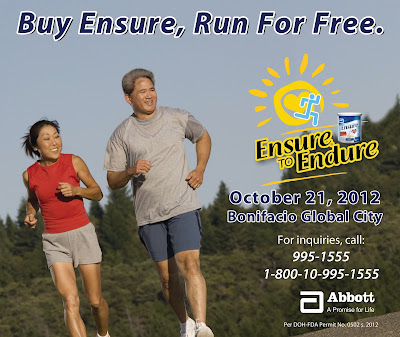 Posted by deemenrunner at 12:46 PM No comments: