Leveling Up to Ultramarathon: 60km at LU2TA 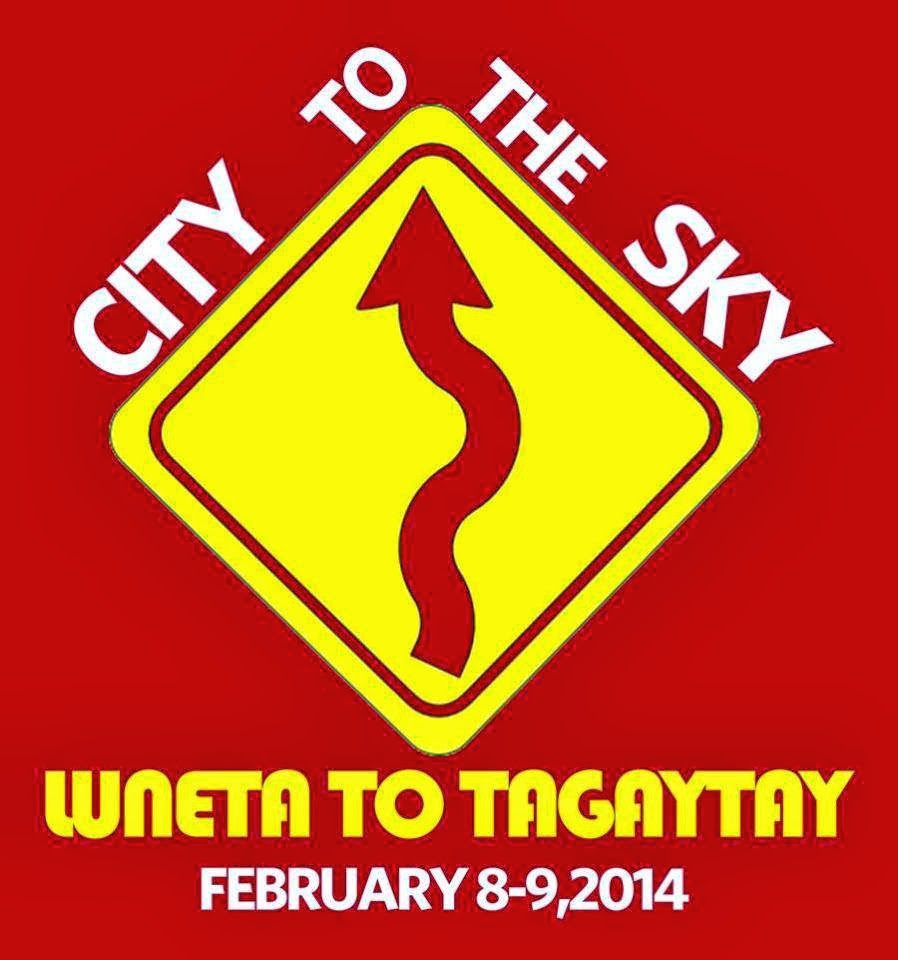 I often mention to running friends I'll never venture into race events beyond 42km. I ate my own words last February 9 when I ran my very first ultramarathon - not just 50km mind you. It's a 60km event - LU2TA, from Luneta to Tagaytay, hence the tagline "City to the Sky". Well what it became in actuality is a 63km event - started at Rajah Sulayman instead of the intended Luneta.

My 711 Run 1000 post accounted the events leading to my hospitalization and a week-long rest from work. However, that did not stop one of my Team Banana teammates Syril to bully me in registering for LU2TA. Invite after invite I was just laughing it off. I know I'm in no condition to even run a full marathon with my recent illness.

But there are just instances when a certain seed has been planted in our heads, that we just can't shake off. I was curious if I could do an ultra. With 4 years of running experience, I feel I am ready. I told Syril and Becky Runner it's a go. I decided not to tell anyone else though what I am about to do. This will be my secret race event. It's a win-win situation for me. If I finish the race, I get to brag about it. If I DNF, no one will know. Hahaha!

Fresh from my long rest, I had to have my legs warmed-up again. February 2, I did an LSD with Syril and Mark Runner. No target distance, but I was hoping to at least do a half-marathon. My body only managed a 14km run and I already got tired. With one week until race day, panic started to sink in.

But this is a commitment. The next day, I went to a BDO branch near the office, and deposited the registration fee of P1750. This is it! There's no turning back now.

Desperate to be ultramarathon-ready with one week left, here are the things I did:


Hopefully, the effects of everything I did will work their magic come race day.

February 8, Saturday, went to Makati in the afternoon to go to the grocery, hear mass at Greenbelt, and then meet with Team banana teammates Syril and Mervs. Sy generously offered his support car, though I had doubts one support car can support multiple runners with different race pace. I'm really going into this ultramarathon experience with no idea on what my expectations should be, except the vision of me crossing the finish line. Haha!

We arrived at the assembly area and were informed we need to check-in our bibs. The race organizer Prince Baltazar also served as the host of the event, while runners were all around the area just waiting for the signal for race start. Funny how at the stroke of midnight, Prince just did a quick 15 second countdown and then runners were sent off, coming from different locations as there was no definite assembly area.

Within the first kilometer, I noticed Sy speeding off in a very strong pace. I was originally planning to pace with him (to not complicate our support needs), but I had to let go and run a slower pace. So I was on my own.

We passed by two of the usual flyovers at Roxas Boulevard without the comfort of road closure. First time I did a run like this, with passing vehicles and without road cones and without much marshals along the way. So this is how running an ultramarathon feels like. Its fun and risky at the same time.

While enjoying my alone time, a runner suddenly approached me from the right - it was Loyce! Glad to see a familiar face. He was surprised seeing me doing an ultramarathon. I told him my strategy to keep this a secret event. So now I had someone to pace with. Yay!

Loyce was kind enough to offer extending his support to me, with his girlfriend Mary Ann doing primary support duties (Thanks Mary Ann!). Your ice-cold Coke was a savior! Haha!

Approaching half-way point though, Loyce was complaining about tummy problems already. He had to do his thing so he told me to go ahead and will catch up if he can. So again, I was left alone, though I still was able to catch up with Syril's support crew to refill my hydration bottle a couple of times. Thanks Goldi and Set for the cheers and support during my quick pit stops.

And so the long and tiring route continued. Aguinaldo Highway is a very familiar territory (as I worked at Intel Cavite for a few years) so I knew how long I still need to run to finish the race. Official hydration stations were placed every 10 kilometers. There were water, Gatorade, hard-boiled eggs, bananas and lots of Flat Tops at each station, much to my delight. I probably consumed 3 to 5 Flat Tops every time I stop at those stations. Haha!

The gradual inclining roads of Aguinaldo Highway eventually took its toll on my body. I had to do frequent long walks and shorter runs. When I saw sunrise, I realized I have been running (and walking) for 6 hours already! At this point also came the realization I was already an ultramarathoner, as the 42km point was already way behind me.

As I reached the end of the Aguinaldo Highway, I knew it was just one last push as I turned left on the Tagaytay-Calamba road. Excitement kicked-in a bit so I consumed my last GU Roctane which gave me energy to run (though in a slower pace as it was quite an upHELL).

The temperature's perfect, not hot and not too cool. I had limited hydration left on the bottle I'm carrying but I was not that thirsty. I heaved a big sigh of relief as I saw the entrance of the Palace in the Sky, but the zigzag road and inclined road going to the top was a killer. As I saw the finish line, I didn't even bother to run. I finished the race - all 63 kilometers of it! I am now an ultramarathoner!

It was then time to hang-out and cheer other runners finishing the race. I was in the company of Team SCR, what a bunch of fun (and strong) runners!

Two days later, results were released at this link: http://www.webscorer.com/race?raceid=18280

Now you might be asking, will I continue this UM craze? Naaah. No plans yet on doing my 2nd ultra. It would probably take some time. The question bothering my mind has been answered already anyway.

Can I finish an ultra? HELL YEAH I CAN.
Posted by deemenrunner at 11:23 PM 2 comments:

Blast Off Run for UP-PGH Hematology Patients on February 23, 2014 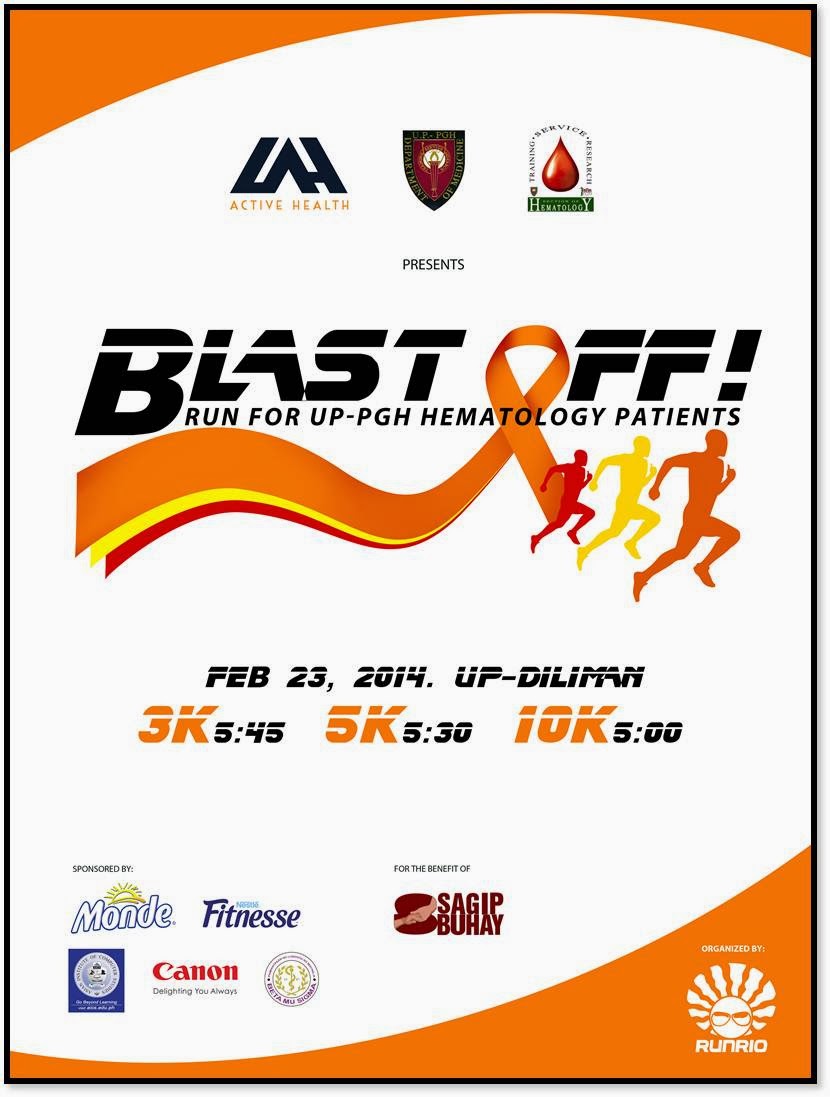 Posted by deemenrunner at 1:53 AM No comments: 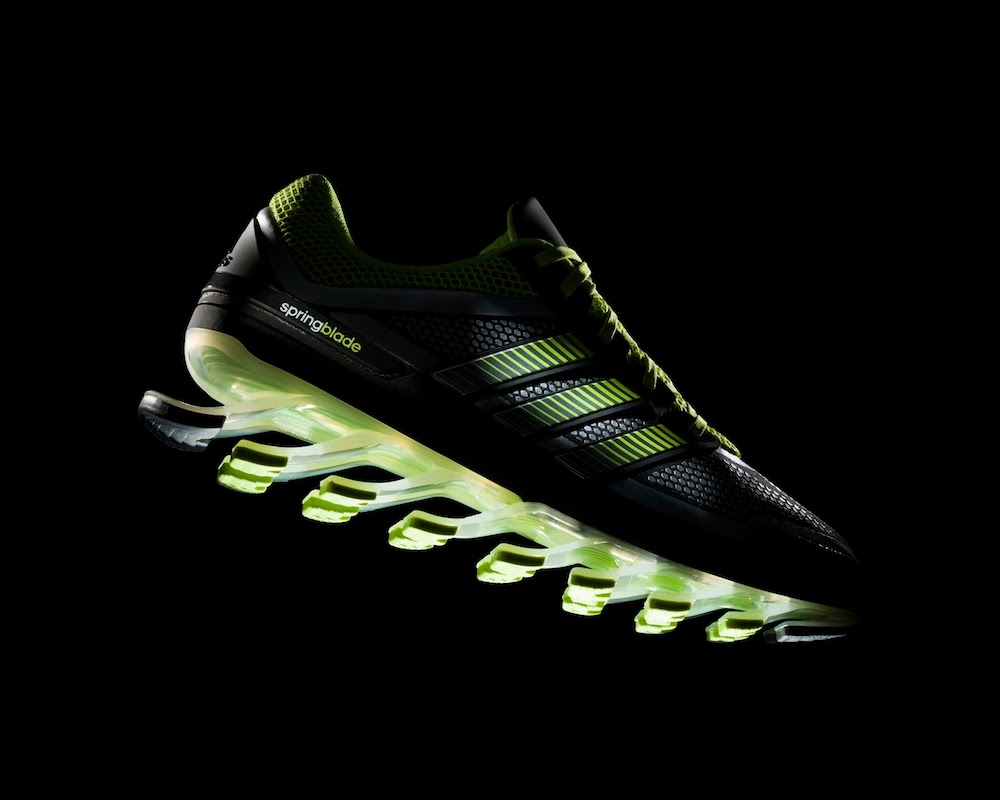 Manila, February 2014 – Today adidas launches Springblade in the Philippines, the first running shoe with individually tuned blades engineered to help propel runners forward with one of the most effective energy returns in the industry.

Unlike standard EVA midsoles that deliver energy return in a vertical direction, Springblade features 16 forward angled blades made out of a high-tech polymer.  The highly elastic blades instantaneously react to any environment, compressing and releasing energy to create an efficient push-off that feels like you have springs under your feet.

“Springblade’s progressive look and blade technology are radically different than any running shoe ever created,” said James Carnes, global creative director of performance at adidas.  “At the same time, adidas’ goal is to create a beautiful performance shoe designed to be simple and intuitive.” 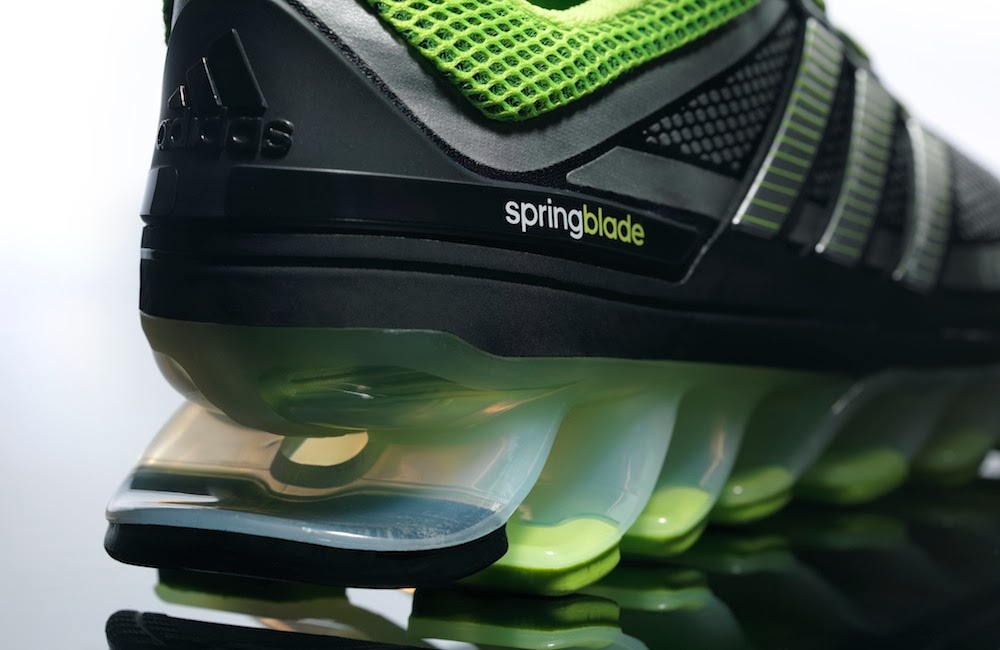 Carnes continued, “Every aspect of Springblade is engineered to reflect extensive athlete insights to help make them better.  For design inspiration, we drew upon everyday objects that deliver explosive energy return – everything from springboards to pole vaults and motorcycle suspensions.”

Each blade is precisely tuned in geometry, thickness and position for each phase of a runner’s stride to provide support and a full range of movement. Additionally, Springblade’s flexible construction was designed to hug the top of a runner’s foot, locking it in to harness the energy returned from the springs on the outsole.

“adidas is continuing to develop new innovations based on what athletes not only need but demand,” said Mikal Peveto, director of running at adidas America.  “We know we have something special with BOOST cushioning introduced earlier this year and we’re confident Springblade will set us apart from the competition once again.”

Peveto continued, “Six years in the making, Springblade provides one of the highest energy returns in the industry.” 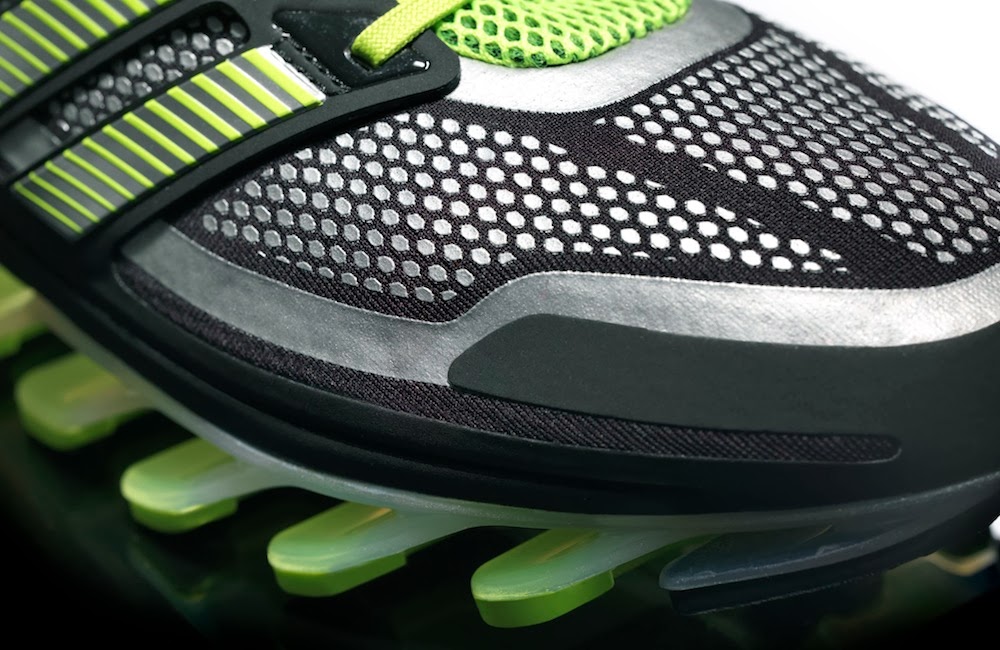 adidas running innovates high performance footwear and apparel with easy to understand benefits to help athletes of every level get faster and better for their sport.  For more information visit facebook.com/adidasPH.
Posted by deemenrunner at 1:27 AM No comments:

The most anticipated Run United Trilogy kicks-off its first leg for 2014 on the 16th of March! FASTER. HIGHER. STRONGER. It's the 2014 battle cry.

For online registrants: singlet will be provided during the race kit collection, sizes option will be available online on a first-come, first-served basis.

For in-store registrants: singlet will be given upon registration, sizes will be on a first-come, first-served basis. Singlet and finishers shirt sizes will be available for fitting.

REMINDERS:
- Registration is on a first-come, first served basis, and may end earlier than the announced deadline. Race slots may run out before March 9, 2014.
- Runners who buy prepaid cards at our stores will receive their singlet upon purchase. Runners must collect the rest of their race kit (race bib and Active Health items) at Race Kit Claiming on the following dates.


- Singlet and finisher’s shirt size availability will be on first-come, first-served basis.
- Singlet and finishers shirt sample sizes will be available for fitting at the registration centers.
- A Valid ID must be presented at Race Kit Claiming. Those claiming race kits for others must bring authorization letters.
- D-Tag will be provided to every participant to get the runner’s accurate time result and must be surrendered to claim the finisher’s item after the race.
- No BIB, No D-TAG, NO RACE.

RACE MAPS:
- To be uploaded as soon as available

I've already registered on the 21km category on the very first day of online registration. Spell excited. Haha! See you there! 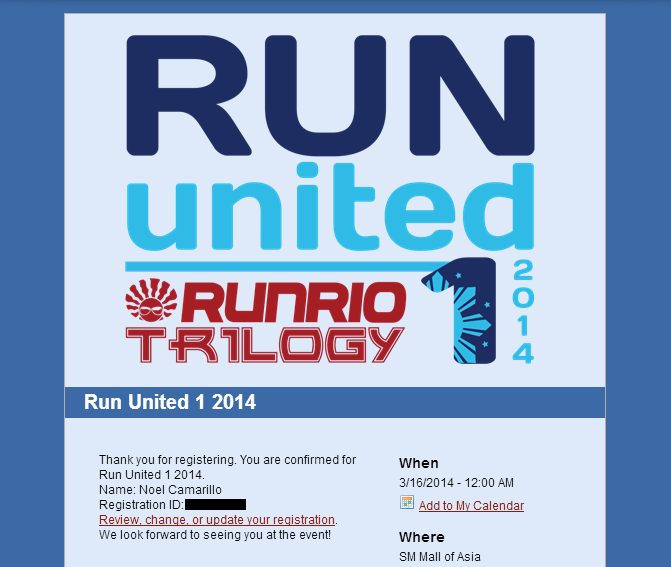 Posted by deemenrunner at 1:00 AM No comments: