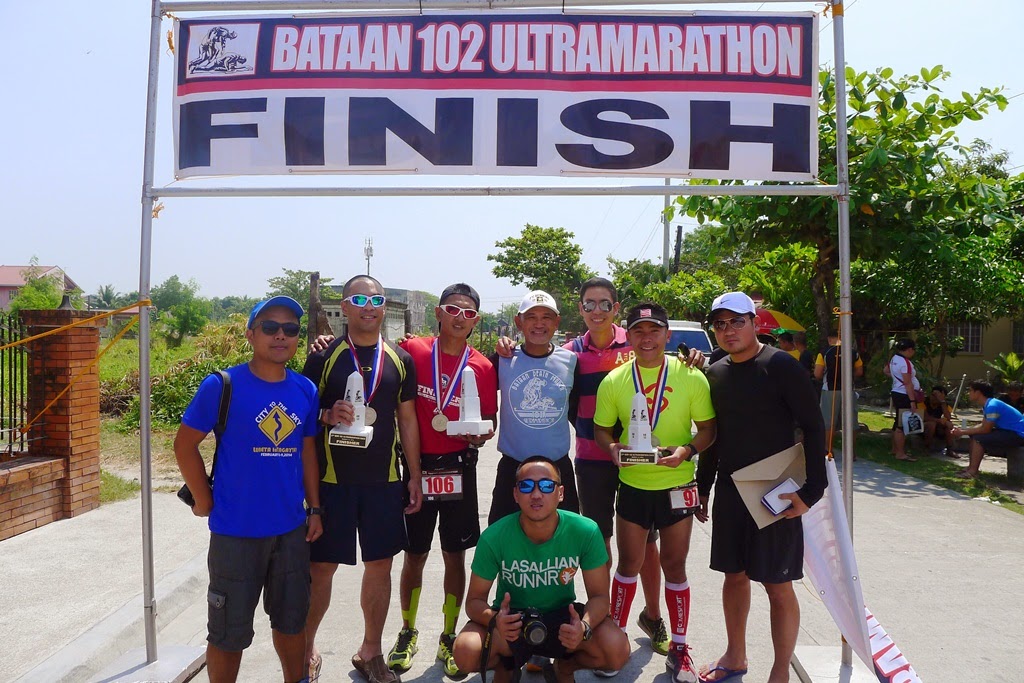 It's always flattering to be invited to be part of an ultrarunner's support crew. It only means you're someone trust-worthy enough to take care of the runner's needs during the entire long distance event.

Supporting in Bataan Death March (BDM) 102km is not new to me as I've already supported last 2012 when my Team Alpha1 teammate Eugene embarked on his longest distance run yet. (He placed 2nd runner up by the way and you could read about that in my BDM 102 2012 blog post.)

Now being part of a new running team of ultramarathon addicts (Team Banana), I was already expecting requests for support as this year's BDM neared. Both Syril (Prof) and Wyatt (Bokidol) kept asking if I could be part of their support crew, and I kept asking them back of their concrete plans and strategies of which they did not have a ready answer. I remember when I supported Eugene two years ago, we had a number of meetings to really prepare ourselves for the big day, so I was kinda expecting the same. No planning sessions occurred, and I don't think someone even bothered attending the runners' briefing. Haha!

As race day neared it was still not clear to me whether I would support Sy or Wy, who is bringing a car, who will support who. I guess with their experience in their previous ultramarathon events it was more of "bahala na" mode. Little did they know that Bald Runner events are different, with strict guidelines and rules to follow, so a lot of preparations are vital.

March 1 came, a Saturday. Our rendezvous point was at Starbucks 6750, Makati. I did some shopping for some supplies before going there, as I had no idea what Syril or Wyatt brought with them. Compared to my experience previously where we stayed overnight at Mariveles, this time we met 4pm in the afternoon and planned to travel for about 5 hours to KM0, just in time for the 10pm race start. A little risky if you ask me, but we arrived there anyway, and we were greeted with a long queue at the runner's check-in counter.

Syril was not even wearing his shoes yet, we still did not have any ice, and time was ticking. Good thing support car #2 (Wyatt's) already had some tube ice available, so we split whatever they had into two, hoping that somewhere along the way we will be able to buy more ice.

We went ahead to KM7, the first legal stop of runners after traversing the crazy, zigzag inclined road. As usual the festive mood was very prominent at this location as this is the area where almost all support cars converged and you get to see the early frontrunners of the race.

Our support cars, while leapfrogging, often meet whenever we park for our next stop, as Syril and Wyatt almost have the same pace, and they were just a few hundred meters apart. Wait times would usually be a time for chat, eating and of course cheering other runners on as they pass by. Oh and I forgot, taking pictures too!
Eventually Syril caught up with Wyatt (with a corresponding epic set of tantrums which unfortunately Mervin and I failed to witness) so they instantly became pace buddies. Good timing as well as another Team SCR runner, Jaylord, needs replacement support (as his support car had some issues).

Mervin and I then became the support crew of two runners. As the sun started to rise, our 4km leapfrog strategy started to decrease to 3 to 2.5 to 2. Syril would alternate water and Gatorade as hydration on every stop, while Wyatt will clap his hands in anticipation whenever we approach him with an ice-cold Coke. Sy's source of energy would be Flat Tops or M&Ms, though I don't remember Wyatt consuming any solid food except for one stop wherein they both had a bite of California Maki.

Kilometer after kilometer our runners endured, even with the sweltering heat of the sun finally taking its toll on their bodies. The cold water spray and sponges really came in handy as every stop we needed to lower their temperature. At this point, I can't help but pity them as we could really see how they struggled to run in the heat of the sun. Stops and rests became longer. Mervs and I still managed to push them though to keep going, even though Wy and Sy already lost hope to bag the GOLD medal (finishers under 13 hours).

As we approached the final couple kilometers, I can't help but feel nostalgic - the feeling of meeting the runner you supported as he crosses the finish line, successful in his 102 kilometer journey. Supporting Eugene before and knowing he was 2nd runner-up, and now meeting both Wy and Sy as they finished strong, is a comparable, triumphant moment.

Wy and Sy placed 33rd and 34th respectively, among 300 runners and 253 official finishers, with a time of 13 hours and 38 minutes. I was there to capture their finish line moment, proud to be part of their support team.
KM102 is a place for meet and greet, congratulating other BDM 102 warriors and finishers. And as you may already know, I have the photos to prove it.
After having breakfast, we went back to the finish line area to meet more race finishers as the race cut-off approached.
Side-story: We were all wondering where our Team Banana teammate Mark Mark was. While we were anticipating his arrival at the finish line, the other support car (with Beck-beck, Ikasam, and Wyatt) was at KM95 also waiting for him to pass by. Mervin and I were discussing he might not make it to cut-off time, and were already feeling disappointed on the thought of Mark Mark not finishing the race. Funny thing is, those were worthless worries, as Mark Mark was just inside the KM102 hall resting! He also finished within the SILVER medal group. So all's well that ends well.

Team Banana has a lot to celebrate and be thankful for. Before heading home, we stopped by Jollibee NLEX for some BDM chit-chat (and reminiscing Prof's tantrums, LOL!).

A week later, the team had a "formal" celebration at Gerry's Grill. A few bottles of beer became legal. Thanks for Wy and Sy's treat! 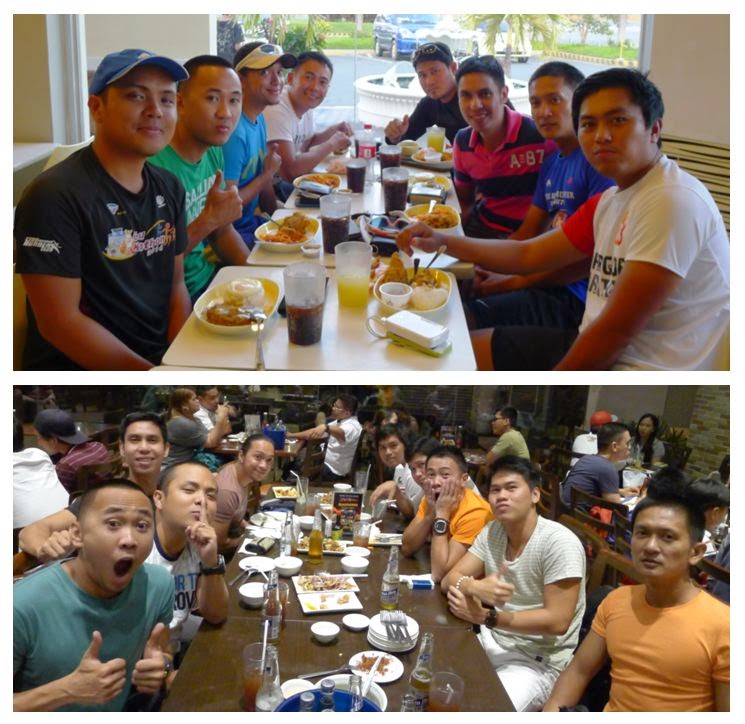 Next year, I'm sure they will be eyeing that grand slam prize (BDM160 and BDM102). Haven't experienced supporting in 160 yet so I'm sure it'll be fun. I'm also contemplating on running 102, but we'll see.

Again, congratulations to Wyatt and Syril - BDM102 warriors! Let me end this blog post with their Facebook thank you messages, which made supporting them even more worth it. 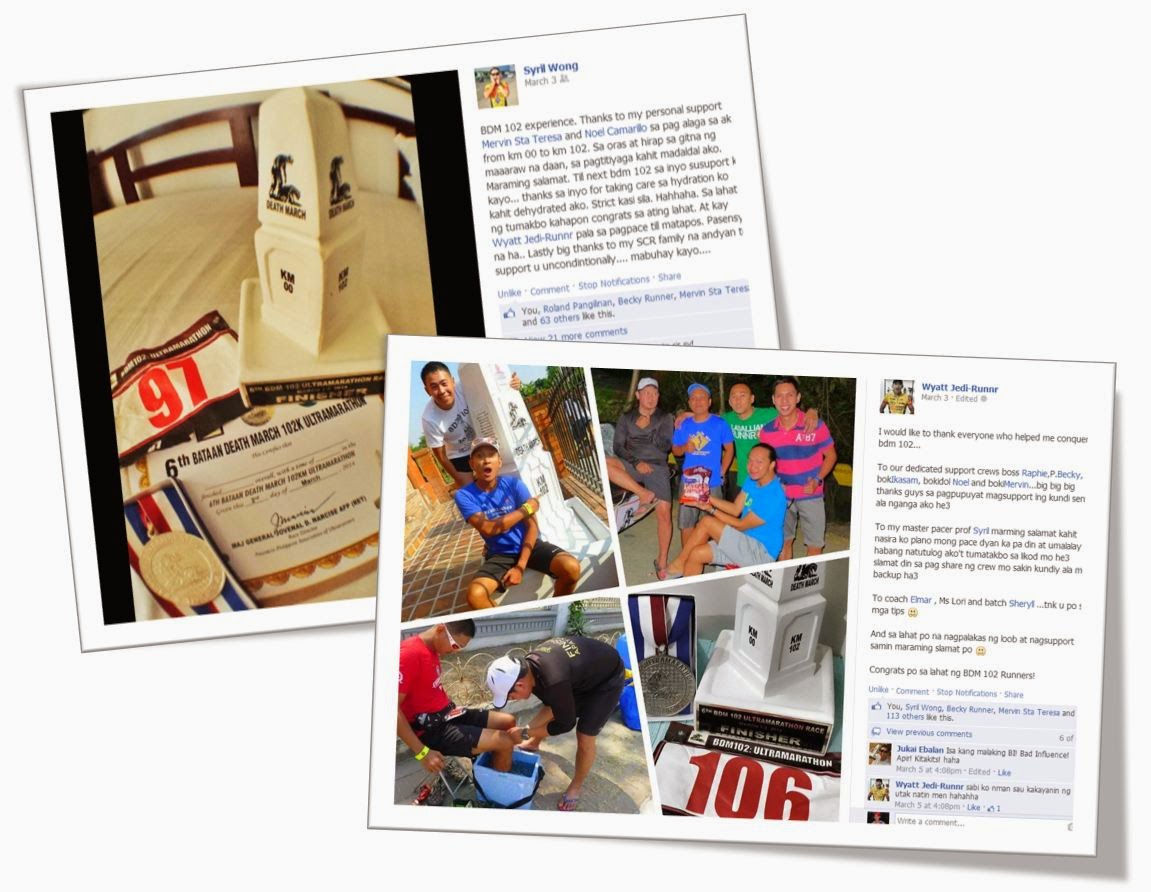 Posted by deemenrunner at 5:04 AM