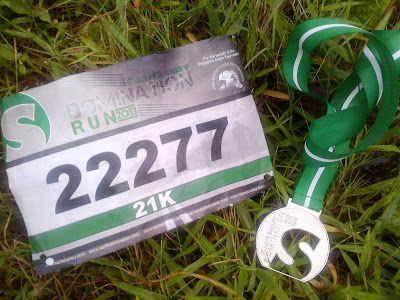 Contrary to what some runners are reporting that Sante Barley Domination Run is an original race with Cavitex as part of its race route, it is not. The first race which was held at Cavitex is 711 Run 800, which happened 20th of January this year. I was fortunate enough to have joined that race (read about my race experience), and in comparison, I'd say that the 711 Run is still the Cavitex race to beat.

I arrived at the race venue (Aseana City) as early as 2:30am to get a decent parking slot (this is a major learning for me from the 711 race, where I struggled to find a good parking space). The starting line was a short walk from where I was able to park (just across the street from McDo Aseana). I stayed at the parking area and in a span of a few minutes, the parking lot was already filled with cars of runners, with a number getting in the parking lot but failing to get a slot - so they had to settle to the next parking lot option which was near DFA.

Around 3:15 did some quick warm-up and stretching before heading out to the assembly area. There were quite a few runners already waiting there, as marshals were already calling for the 21k runners to assemble. By 3:30, I consumed my GU Roctane as part of pre-race ritual. 3:40am - Sir Boy (aka the Running Host) made the most disappointing announcement much to runners dismay - the race gun start is postponed from the originally announced 4:00am to 4:30am, due to an unannounced reason. For me, this is the mortal sin of running events. Sir Boy called it "a slight delay", but what does a 30-minute delay mean?

- It's 30 minutes more sleep for some runners
- It's potentially an additional payment for per-hour parking space
- It means hotter running conditions at the latter part of race for some runners (and could have been the cause of lacking hydration and cups as reported by affected runners; hotter conditions, more water consumption obviously)
- It's plain wasted time

Sir Boy absorbed the runners' reactions and with his hosting skills, pacified the crowd (I would have preferred the race director showing up and taking full responsibility for the delay and apologizing to everyone though - which never happened.) 4:30, the 21k runners were sent off.

- Route was the same as 711's, mostly flat and a PR course
- Hydration is so-so - room temp water and no sports drinks. Hydration stations were placed at one side of the road ONLY, so upon U-turn, heading back to the finish line, you have to cross to the other side of the road, running against the flow of other runners, just to get water. Poorly thought of and executed.
- Photo-Ops covered the event, so of course that means high quality photos for everyone!
- Loved the 21k finisher medal. Great design!

Upon crossing the finish, I chanced to look at the timer which displayed 1:59:59! Haha! A "pasang-awa" sub-2, which brings me to the event's next delay: the release of the official race results. As of writing, a week and a day has passed and still no results have been released. It normally takes 2-3 days for race events to release results due to better timing technology. I wonder what's causing the delay this time.

Sante Barley Domination Run's a decent event, but still has a lot of room for improvements, should they choose to stage a race again. Hopefully, they learn from this year's mistakes.

And now to the photos:

Posted by deemenrunner at 6:30 PM