A Cancellation and A Replacement

Rumors were circulating for some time on Condura Skyway Marathon 2014 not pushing thru as promised on the 2nd of February next year. December 11th it was confirmed via an official statement released at the Condura Skyway Marathon Facebook page. The announcement got mixed reactions - some applauding the move, and some dismayed and disappointed. For me, I was really eyeing joining the marathon next year, and the cancellation news was a big upset. I'm sure there's more reason behind the cancellation, but as for all losses, we just need to respect and accept what has transpired, and move on.

I really wanted to join a 42.195km event, with my personal goal to do one full marathon every quarter. So with a motivation of an impulse, I thought of my original plan B - Cebu Marathon! It's 3 weeks earlier than Condura, which will definitely affect my planned training schedule, but I think it's the only worthy marathon event replacement for Q1 2014.

Fortunate that Cebu Pacific was still offering promo fares, so I was able to book a flight leaving Manila January 10 morning and going back January 12 afternoon. Perfect flight schedule and just one vacation leave at work. Runner friend JP also offered to share accommodation (Thanks JP!) so that's two items marked on my checklist.

Last item is of course the race registration. Tried doing an online registration but to my surprise, credit card option's already marked SOLD OUT! PANIC!!! I messaged Ally from Runrio asking for help, and she told me she'll reserve me a slot (Thanks Ally!). December 15 though, I chanced to pass at Riovana BGC and luckily, 42k prepaid cards were still available so I grabbed one with a late registration fee of Php2200. A bit pricey, but I know it will be worth it! 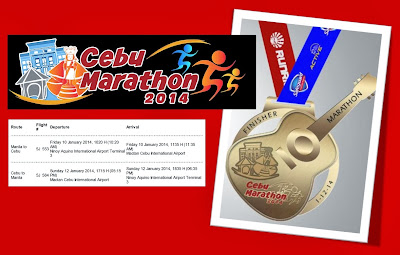 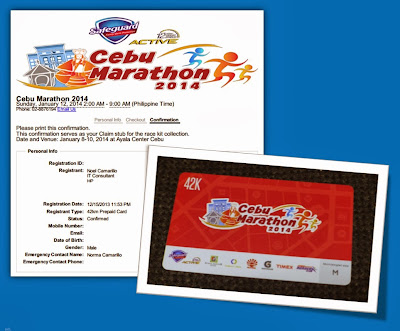 So far, I know already some runner friends going to Cebu as well for the race - JP, Becky Runner, Syril, Wyatt, Wesley and Mish. This will surely be one enjoyable quick getaway! See you guys in Cebu in a couple of weeks!

Posted by deemenrunner at 4:51 PM