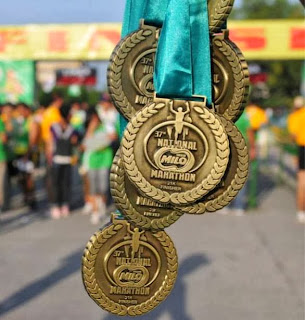 Milo Marathon is a race I definitely want to join every year; it's basically a tradition. My 21k PR is 2011's December edition, where I got a time of 1:51:19. Until now, I still could not beat that PR. Haha! I've been dreaming of getting a sub 1:50 half marathon. Maybe 2014 will be kinder.

The Milo Marathon uses a winning race formula, and Runrio has already perfected the execution of this top-notch event. The cut-off of 2 hours and 30 minutes for 21k makes it one of the tougher, yet more fulfilling races to participate in.

Here are some of my race observations:
- Overflowing (cold) hydration - both water and sports drinks - as always from a Runrio race
- Lots of marshals and security
- Fun post-race activity area
- I won't get tired collecting the finisher medal even though the design does not change much - there's something "elite" about having the Milo Marathon medals as part of one's collection
- The only improvement area - I was a bit confused with the 21k kilometer markers - a lot of them were misplaced along the route. Not sure what happened here, but got the same feedback from fellow half-marathoners.

Read also from Facebook a number of posts regarding rampant cheating on the long distance categories this year, even on the full marathon! Very disappointing to find out what some people would do just to get a medal and some loot. Sigh.

On a positive note, I have lots of cool photos to share! Haha!

Thanks Nestle and Milo for continuing to provide running shoes to children who dream of being future athletes of the country. See you at the Milo 2014 events!
Posted by deemenrunner at 4:20 AM