Nike We Run, I Love! 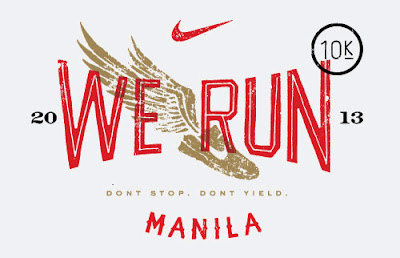 Nike We Run Manila is one of the race events I mostly anticipate every year. I love the brand and the feel of its race. First time I joined was in 2011 (my race experience at this LINK); I also registered on the 2012 edition but failed to run the event due to an injury.

Nike's vision is to hold the race at a different venue each year, so when runners heard the news that 2013 will bring the race to Marikina City, this brought about a lot of skepticism among running enthusiasts. Even I doubted how a race of this magnitude (15,000 runners expected to join) will be staged at such a small city and unfamiliar (running) territory.

But the 1st of December, Coach Rio Dela Cruz proved every skeptic wrong. The event, in my opinion, is one of the most organized races this year, and only Runrio can pull this off. Its definitely on my top 5 races of 2013!

Flashback: October 25 - Upon announcement of the opening of registration for Nike We Run Manila 2013, I immediately did an online registration. It's safest to register as early as possible, as it's known that this race sells out even before the registration deadline. (And until now, I still don't understand some runners who keep on ranting that they weren't able to register because registration was closed way ahead of the deadline. You don't have to wait until the last day of registration, guys!)

There were no official announcements on how this year's shirt will look like. There's nothing that running sites and blogs can do except speculate - is it RED? Is it GREY? Is it BLACK? It's all exciting and only built bigger anticipation to the race.

Everyone only found out during the scheduled 4-day race kit claiming, which started November 21st. It's RED - my fave color! I also bought the matching Nike WE RUN cap at Nike Park.

December 1 - With the Runrio SMS brigade a couple of days before the race, urging runners to go to the race venue early, I can't help but heed the warning. Marikina City is definitely not my turf, and paranoia of the difficulty of getting a decent parking slot made me plan to travel very early on race day. I traveled with Ryan and his sister Herlyn, meeting 11:30pm at Makati (the race gun start by the way is at 4pm).

It was a quick drive via C5 going to Marikina, and when we reached Sumulong Highway, we already saw some directional signs going to the designated parking areas. We skipped those as I was a bit confident we'll still get parking somewhere near Marikina Sports Center. We passed by the starting arc, still being set-up, and got a very lucky break! There were still a couple of parking slots at McDonalds just across the starting line!

The bigger surprise is that being there at about 12:30pm, there were already a number of runners that came earlier than us. It took us quite some time to get a table at McDo, where we had a light pre-race meal. We still had a lot of time to kill so we stayed a bit at our table, and then after, stayed at the car. We waited for the drizzle to stop before going out and took photos of the event venue. I can't help but be awed on the sheer number of people sporting their red Nike top, walking around, taking pictures and getting excited for the race.

Before 3pm, runners were already heading to the assembly area, so we did as well, as the announcement was made that there would be two waves, and no runners will be allowed to run after 4:20pm. It's best to be in front on a big race such as this. The Marikina roads were not that wide so there will definitely be some human traffic congestion initially when runners are sent off. It was quite a long wait but runner friends eventually arrived who made the wait enjoyable.

The first wave of runners were released exactly 4pm with confetti and music. There were a lot of spectators and cheerers not just on the starting area but all along the route. The support from the city was great, and made the race as festive as it could possibly be, with residents on the sidewalk clapping and cheering and taking pictures, and kids smiling and high-fiving runners. (This was the same mood and feel when I had a race at CamSur.) There were also a number of music stations along the 10k route, reminiscent of Rexona Run to Your Beat, playing upbeat songs.

Another smart innovation I noticed on the race is how they handled the hydration stations. As part of the first wave of runners, reaching the first hydration station, runners were directed by marshals to get water at the latter half of long hydration stations (I could not exaggerate further but the stations were really loooong), reserving the first half of the tables for the next wave. This way, there will be no shortage of water for all runners. Hydration personnel were moving as efficiently on the stations, quickly refilling cups of water and sports drinks. The manpower behind the race is really commendable.

I caught up eventually with my running buddy Ryan mid-way through the race and we just paced together until the finish line, clocking at 58 minutes (I love how the race ended at the track oval by the way). Finishing a decent time, there were still no queues at the loot area, which is again well-organized and well-manned. After claiming my loot, went back to the car to get my camera, of course for more event photos.

A couple of days later, the race results were released at the official Nike We Run website.

It only gets better and better! Kudos again to Coach Rio, Runrio and Nike for staging one of the best races of the year! I move. You move. Nike We Run Manila/Marikina rocks!
Posted by deemenrunner at 11:40 PM