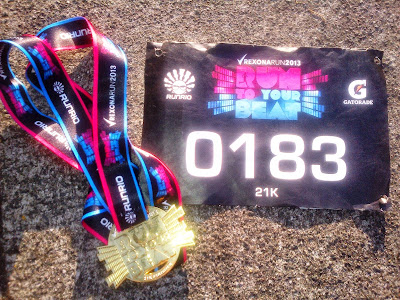 Rexona Run's 2013 outing is probably one of the year's best 21k race events I've joined in, up there on my top three. Logistically difficult to stage but they delivered it amid some minor flaws which you could just easily ignore after experiencing the race.

October 17 to 19: Race Kit Claiming
SM Mall of Asia's Music Hall again became the venue of the race kit claiming. There was a bit of miscommunication on the claiming dates, with October 16 initially announced and stamped on registration forms but was moved a day later. Good thing I was checking Rexona's official FB page regularly so I was updated. Picked up my kit as well as my other blogger friends' - CJ Run Adobo King, Thirdy Lopez, Rolly Speedy Titan, Allan Running Free Manila and Jet Paiso.

October 20 - Race Day
This is probably the earliest gun start for a 21k race - 3AM! An early morning race with a night concert feel. I was at the venue 1:30am, paranoid of losing a parking slot, as I am anticipating a sold-out event means only one thing - lots of people! I had spare time then to go around and take photos of the event set-up. The lights and sounds really build up the excitement!

Got back to my car as fellow bloggers will get their kits from me. We took a quick snap then headed out to the assembly area.

Rolly and I plan to be on race mode so we squeezed our way in front of the pack, as we bumped into JP and Jaycee during race briefing. The usual video of the race route was shown, and then the 10-second countdown to gun start. Then a series of events came to unfold - the emcees shouting the band Sandwich performing "Sugod" and with the first steps of the 21k runners, a fireworks display accompanied the adrenaline rush-filled music. You could definitely feel the excitement of everyone. What a way to start the race!

The biggest surprise for me is the neon tunnel - this was something everyone was raving about after the race. I wish there was more (though I knew that setup was way too expensive). The lights and the music inside were insane! You would forget for a moment that you are in a race. Definitely a race innovation worth commending!

And now to my race notes:
- Abundant ice-cold hydration and Gatorade
- Surprised there were no bananas along the 21k route, which everyone is used to on a Runrio race
- Speakers (or DJ stations) were well-placed and well-distanced from each other but my only complaint is that the songs being played were the same! With a plethora of running music choices, it was a bit disappointing why they had a limited playlist.
- Gun start of 10k was 3:30am and the 5k runners at 3:45am. Merging of all distance categories was a bit of a disaster for me, as I was targeting to finish a sub-2. It was soooo difficult to overtake a lot of walkers along the route. Some even stopping abruptly, taking photos with friends along the road, and walkers lining up making it difficult to find space to pass through.
- Great design for the finisher medal and the finisher shirt for 21k runners. Love the loot as well.

I still managed to do a decent 2:02 finish and just shrugged off my disappointment of not meeting my target. The race was all about fun anyway and did I have fun!

Post-race is again time to meet and catch-up with runner friends and just hang-out. We stayed at the race village until sunrise.

If you missed the fun, the below video SDE would pump you up and make you wish you were there! Kudos to Rexona and Runrio for upping the ante of a "fun run". We're all looking forward to what Rexona Run 2014 is going to offer next.

Posted by deemenrunner at 4:33 AM