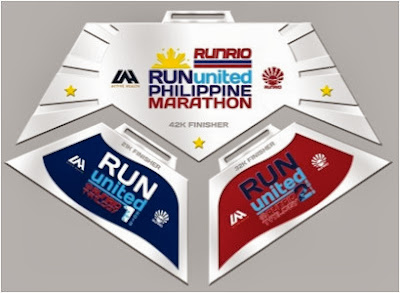 Surreal that I just finished my 8th marathon at the Run United Philippine Marathon last October 6. Eight 42k runs in a span of three years is quite a feat!

Just a bit of humor - I found this funny (yet very true) video on the web - The 8 Stages of Marathon Running - to celebrate the 8 crazy marathons I finished:

The 3am gun start of the race only means one thing: adjusting my body clock to sleep very early both Friday and Saturday. I need to be up 11pm Saturday to have my "breakfast" (ooh boy what a weird time to have breakfast) and start my preparations. I need to leave the house 1am, which would mean me arriving at the Mall of Asia about 1:30am, park my car there, then ride the shuttle bus to the starting line at BGC.

I arrived as planned but what I didn't anticipate is the number of runners on queue at the shuttle boarding area and guess what? No shuttle buses! The queue kept getting longer and longer. I was hearing one of the marshals saying there was a shortage of buses and we were just waiting for the initial set of buses that left to go back and pick-up the runners on queue. I think it was about 2:15am when the buses arrived. Whew, what a buzzer beater.

Arrived at BGC around 2:35am, I had a few minutes to do my pre-race rituals - take my Roctane, do a few warm-up exercises and take a pee break. Met with the usual suspects - Ryan, Rom, Marte and Joshua. I turned on my Soleus GPS watch and got nervous as it took a long time before getting any signal.

We were located far back at the 42k assembly area. I'm on pacer mode again with three of my companions being first-time marathon participants - Rom, Marte and Joshua. Strategy was to take it slow, probably a 7 to 8 minute per kilometer pace only.

And then we were off! I pressed the start button of my GPS watch and it went on INDOOR mode! That sucks! My watch failed me. But I could no longer do anything at that point so I just shrugged it off. I'm not on race mode anyway.

The initial part of the race was quite crowded, as we went around the streets of BGC. The runners began spreading out when we reached the Kalayaan flyover all the way to Roxas Boulevard.

I don't remember the point when we lost Joshua but it was somewhere along Roxas Boulevard already. As for Marte, he had to go to a urinal break so only two were left with me - Ryan and Rom. We did ok until KM25. After this we were already having frequent walk breaks and we took our time on hydration stations as the sun was up early and the heat was becoming brutal.

At KM29, we had our traditional "taho" break. Haha! We were probably getting a lot of glances from fellow 42k runners who were overtaking us as we were devouring our taho. Just the right kick from sugar needed at that time.

Walk, walk, walk - the story of the last 10 kilometers of this race. Haha! The sweltering heat was not helping at all. The Macapagal Avenue road, dilapidated and runner-unfriendly, was torture.

The good thing is this is a Runrio race - hydration's always a savior. Ice-cold water was abundant in all hydration stations amidst the heat. One can literally take an ice-cold bath.

As we approached the final U-turn at Sentosia and headed back to Mall of Asia, it was a bit of a relief that we are now on the final stretch. The intervals between the kilometer markers seemed to go longer and longer on the final 5 kilometers.

Arriving at Seaside Boulevard, we were still walking, reserving energy for the last hundred meters.

As usual, all the pain went away temporarily as we crossed the finish line. 5 hours and 41 minutes, one of my slowest marathons, but it was a fun experience nonetheless.


One of the innovations Unilab Active Health thought of, which made the finish of marathoners sweeter, is passing under the elevated race village stage and being greeted by spectators and band performers on stage. But due to the grueling heat, we had to pass by the area quickly, claim our loot, and go directly to the post-run recovery area.

The trilogy is now complete. Thank you Unilab, Unilab Active Health and Runrio for staging another year of great races.

Congratulations to my running buddies Ryan, Rom, Marte and Joshua! Let's do this again next year!

*** Photos courtesy of Ryan Santos, Running Photographers, We Run for Good Health, Tsinelas Runner and Photo-Ops. Official race photos can be downloaded at http://photo-ops.ph/
Posted by deemenrunner at 8:26 PM