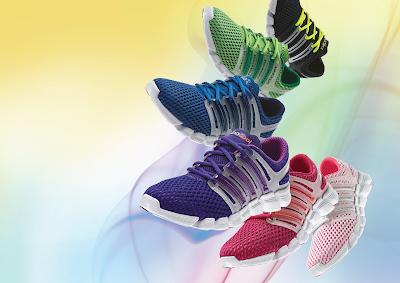 Manila, October 21, 2013 – adidas is excited to introduce the new CRAZYCOOL to the next generation of runners who value maximum flexibility, breathability and comfort. Featuring climacool® technology, the new CRAZYCOOL spots an improved flexible design and construction, an all-around 360-degree ventilation, as well as a high flex midsole to create a dynamic look and fit.

The superior functionality and performance of the CRAZYCOOL line can be attributed to its unique blend of quality material and exquisite design. Constructed to create the ultimate freedom for the movement of your feet, the shoe features anatomical flex grooves, which facilitate smooth transition while running.

The unique upper construction of the CRAZYCOOL with the adidas CoolFrame® material ensures lightweight upper support and increased upper breathability while air channels in the sole allow airflow throughout. An enhanced offer from its predecessor climacool® range, the new and improved CRAZYCOOL boasts a thin micro suede tongue that makes the shoes even lighter. An in-built ADIWEAR™ outsole also boosts durability in high wear areas.

Since its introduction in 2011, the adidas climacool® has remained one of adidas’ best-selling product concepts worldwide. This revolutionary technology was later incorporated into multiple adidas running footwear lines such as the CC Revolution, the CC Ride and the CC Chill. Climacool® material was developed by adidas to reduce in-shoe moisture by 20 per cent and foot temperature by 12 per cent, thereby improving runners’ comfort level and performance as high humidity and temperature in shoes is one of the main causes of discomfort.

The adidas CRAZYCOOL is available in a wide range of colorways and retails for Php5495 in adidas Sports Performance and retail stores.

For more information, please visit www.facebook.com/adidasPH.
Posted by deemenrunner at 4:38 AM