Condura Skyway Run for the Dolphins: My First 21k

Fresh from my first 5k run, an impulse-based, crazy idea came to mind: join my experienced running friends who signed up for their first 21k. I found out they joined one of the country's premier running events, the Condura Run 2010. I was a running newbie back then but at the back of my mind I was thinking, Condura plus Skyway would equate to something big.

A week after Takbo Para Kay Gibo, I found myself lining-up at the New Balance ATC registration booth. A few people ahead of me on queue had their registration forms ready. Curious at what they were signing-up for, I took quick glances at their forms: 5k, 10k, 5k, 5k. And then it was my turn and I handed out a registration form with the 21k checkbox marked. What the hell was I signing-up for?

I was now committed. I had to do some serious training and I had to do it fast. I only had less than 3 weeks left before the event. Good thing my running friends Geoff and Ying were not taking 21k lightly either. They planned regular running practices at the Fort, and I needed to go with them on every single practice. We were trying to build up mileage. And by the first week of February, a few days before the actual race, we were able to run 14k. That's 7k away from 21k, right? I had to convince myself I had the confidence to survive my first half-mary.

February 7, 2010 - Race day. I had trouble sleeping the night before, out of excitement and nervous anticipation perhaps. During the ride to the Fort, we already saw some 42k runners being paced by a guy with balloons on his back. I would have laughed looking at the scene on a regular day, but there was nothing particularly funny when you had the nerves to fight.

Arriving at the Fort, it was already assembly time for the 21k runners. Of course we had to capture our pre-race looks first. 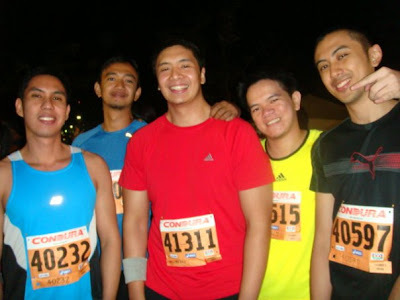 The starting line feeling was intense. Adrenalin rush was starting to kick-in. Upon gun-start, coupled with fireworks and bands playing at the side, the race started. There was a lot of energy in me that I had to leave my running companions behind and run fast. I had my own pace and I was beginning to overtake a lot of runners along the way. Arriving at Buendia flyover, it was a test on who can endure the long, gradual incline better. A number of participants were just walking it out, but not me. I love running inclines; it makes me feel stronger conquering every hard step.

The next part I could remember is the part when we were already about to traverse the path to Skyway. At the base of flyover, race bandits were not being allowed to enter (Sorry guys, but you have to pay to experience this; that's just fair). Again it was a gradual and painful incline. The next thing I know, I was already running the Skyway path and it was worth it. The elite runners were already on their way back to the Fort, and I can only feel adoration for the passion these runners put on the sport. I also saw Coach Rio on his way back. He was alone but the runners beside me were shouting "Go Coach!". I had to shout too.

The U-turn was located at the Skyway toll gate. It was a great feeling to receive the race U-turn necklace. I wore it proudly around my neck and I knew it was now time to go back to the Fort. The sun was already up but the temperature's still perfect for running. I was very happy of my race position by this time. I knew I was kinda ahead; a lot of runners were still running the opposite direction when I was heading back and I even saw my race companions passing by.

By Buendia flyover, I was beginning to feel tired. For the first time during the race, I walked going up the flyover. I just knew that if I try to run during this point, I might not have enough energy to make it to the finish line. There were still a few kilometers to go. After the flyover, I kept a slow and steady pace until I saw what I was long anticipating to see: the final kilometer mark. By this point I ran fast again until the finish line arch. There, finishers were being greeted by race marshalls and being given their medals. The last medal I wore was back in high school, so receiving a medal at that moment was a bit nostalgic. The 21k medal was well-earned. 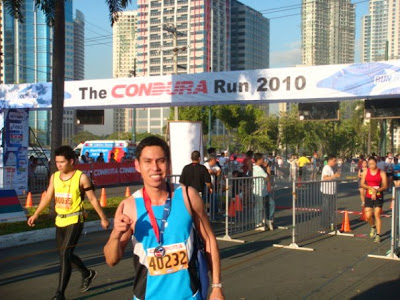 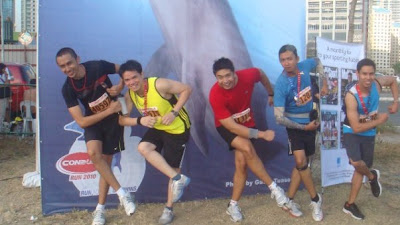 Later that day, the race results were released. I clocked in at 2 hours, 6 minutes and 55 seconds, placing 241st out of 1500 21k runners. This is an achievement that I will always treasure.
Posted by deemenrunner at 6:28 PM