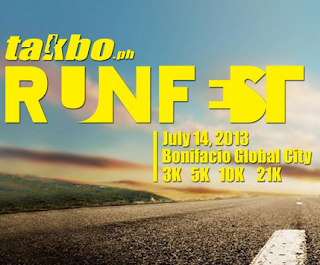 During my review of this year's NatGeo Earth Day Run, I have noted its challenging race route as it utilized Bayani Road and its inclines. However, all that seemed easy as compared to the just recently concluded Takbo.ph Runfest. Most of the time, I found myself gasping for air as it feels majority of the route is an uphill path. As soon as you hit a downhill, you'll make a sudden U-turn to another grueling incline. Something I found unique on the 21km route is its use of two flyovers - the usual Buendia Flyover during the first part, and the C5 Flyover (near Market! Market!) which is something new to runners.

It sounds as if I'm ranting but I'm not. I definitely liked the challenge of the new race route.

Flashback to 3:30am: With the aid of the detailed announcement at the Takbo.ph FB page on parking, I was able to secure a slot on the 34th street parking lot, which was the nearest one on the starting line. I did my usual pre-race routine - apply Bodivance on my shoulders and legs, do a few dynamic warm-up exercises, take a pee break, and then consume a pack of GU Roctane. I was at the assembly area a few minutes past 4am, and 21k runners were greeted by the ever-hyper event host Bearwin Meily (Runtarantantan).

Que Gavan led a short prayer, followed by Jinoe's Takbo.ph anniversary speech. When Jinoe mentioned the event marshals wearing the very striking orange top, I just knew a number of them would be familiar faces in the running community, willing to give back by volunteering.

After the warm-up exercises, the countdown to gun start commenced. 21k runners were sent-off on the dot, 4:30am. I noticed there were no timing device detectors at the starting line so this only means everyone's result will be based on gun time. I didn't mind since I was near the front of the pack. Hehe!

During the first 4 kilometers, my legs felt like lead. They were so heavy and I was blaming the squats that I did last Wednesday (I don't usually do squats while lifting a heavy bar but I did that as part of my Wednesday workout). I didn't expect recovery would take that long. Fortunately, I got my groove back post-KM4 when my legs were all warmed-up and ready to race.


Here are my positive observations on the race:
- On-time gun start
- The challenging route - especially the C5 Flyover with a very killer incline!
- Marshals are also runners. So they understand the right cheers and encouragement that their fellow runners need. A lot were courteous and keeps on greeting runners "Good morning!" with a smile (I reply back of course). Special mention is Racs Salcedo - at around KM15, he was handling the vehicular traffic very well and prioritized runners as soon as they approached the busy intersection. I also saw Rikki Suarez (Cheapanggang Diva) on a bike and Rikki cheered me on and pushed me to run amidst my tired look. Haha!
- Hydration is ok. There were Pocari Sweat stations as well (which were separate), so I assume there were no runners who mistakenly poured themselves with Pocari. Lol! There were bananas as well for 21k runners.
- There were "shower stations" along the race route, where runners could pass through and cool down. I skipped this one as I was afraid to have my shoes and socks wet (and get blisters).
- Photo-Ops covered the event so of course, quality pictures for everyone's enjoyment.
- Organized loot bag and finisher shirt claiming post-race.
- Contrary to some feedback I've read on the 21k medal, I liked it amidst its small size. I guess some runners have just been spoiled too much. I liked the simplicity of it.

For improvement:
- Poor lighting at 8th avenue and Buendia flyover, which was very prone to runner accidents. There were parts when the lights were directly facing the runners and already blinding. Lights should have been positioned at a lower angle to only light up the roads instead. Good thing on my way back to BGC, the sun was already starting to rise so better visibility.
- At the 8th avenue / Kalayaan intersection U-turn, marshals were not prepared to give away the U-turn cords. They were overwhelmed by the sheer number of runners approaching and then had to fall in line just to get a cord. It didn't help that this area was very dark too at that time.

Overall, a very organized race by Lead Pack! And for Runfest's first attempt to stage a 21km category, they did a very excellent job. Kudos to Lead Pack, Jinoe and Que Gavan, and to all the marshals and volunteers!

And now to my favorite part: the photos! There are so many nice quality photos that I can't even choose what to post and what not to. So to make it easy, I'll post them all. Hahahaha! 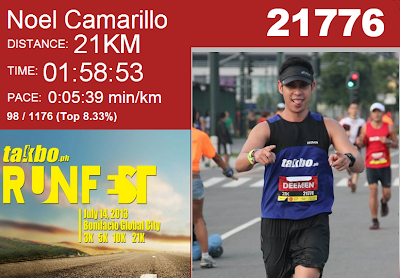 Looking forward to next year's Runfest! Takbo.ph - it all started here.
Posted by deemenrunner at 2:10 AM