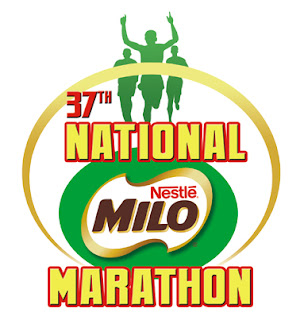 Never have I thought that I'd be able to pace someone on a marathon race event. Yes, I have been able to become a pacer a number of times on 21km races, but doing pacer duties on a marathon is a totally different story.

Joining the Milo Marathon was a last minute decision. Actually, the 42.195km category was already announced closed when I finally convinced my crazy self to join. I had a tip though that there would be a few marathon kits to be sent back to Riovana BGC (probably from sponsors or schools). I told myself if I get my hands on one of those few remaining kits, then it was really meant for me to run my 7th marathon. And so I did get a slot.

I knew I was undertrained, only inserting a few 3-kilometer treadmill runs on weekdays and occasional half marathon races on weekends, but these are never enough for a marathon prep, that is, if I'd like to get a strong, decent time (sub-4:30 perhaps). Since I'm sure I'll be running RUPM on October, Milo Marathon would at least prepare me for it, and hopefully my legs would retain the memory of the marathon pain. Haha!

If I was going to take it easy, I wanted to have some good running company. And so I dropped a tweet during the first week of July to Mish, asking her if she's game to pace with me. She readily agreed, and I was excited to learn she was thinking the same thing - of asking me to run with her. Yay to a marathon running buddy!

Fast forward to July 28, race day. With the early 3am gunstart, I was already up and doing my pre-race rituals 11pm of Saturday. Left home at about 1:20am, arrived at Mall of Asia just before 2am, and got my usual nice parking slot. I called up Mish but she was not responding. Uh-oh! Seems like my running buddy's still asleep! I sent Mish an SMS instead, telling her I was already leaving my phone inside the car, and told her I was wearing a red singlet and a green buff on my head, so she could easily spot me at the assembly area.

When I reached the race village, I spotted familiar faces - JP, Jaycee, Cholo, Bee, Tong and Sheryll. We had our usual Photo-Ops (no pun intended). Though it was announced the day before that Photo-Ops will not be covering the Milo Marathon, much to expecting runners' disappointment, we were still fortunate Tong was there to grab some shots in support of Sheryll and friends.

We proceeded to the assembly area, and a number of 42k runners were already there. The usual program commenced - an invocation, the playing of the national anthem, and a warm-up led by Coach Jim Saret. With the volume of runners increasing, I already gave up looking for Mish at the sea of runners wearing green. I began psyching myself I will be running alone. The race route video began to play and then the countdown to gun start. We were sent off, in a blast of confetti and noise.

I started with a light jog, while excited runners overtook me left and right. I had to control my pace. One important thing six previous marathons taught me is to reserve energy and pace myself properly, else suffer the consequences at the latter part of the race.

Then along Macapagal Avenue, I heard someone shout my name behind my back. It was Mish! She spotted me! I then had to switch from "loner mode" to "running buddy mode". I then became conscious of our pace, and planned of trying to maintain a 6:30 min/km pace, as long as we can. There were times that Mish would speed up (I felt she's getting bored of our pace haha!) but I still managed to make her follow our target pace. Sub-5, but no expectations - that was our mantra.

We were doing quite well, at least until halfway point. At the second half of the race, we did frequent walk breaks, longer stops on hydration stations, and more chit-chats. Haha! We joked a few days before of doing "chika pace" anyway, and so we did.

The crucial part of the race was the last 10 kilometers. The "rainy Milo Marathon" forecast was a hoax, as the heat of the sun was already felt starting 7am. I was getting drained and I felt Mish was too. I kept a positive attitude and kept reminding Mish we're almost there (even though we're not, haha!). Mish' favorite line at the final 5 kilometers was "Wala na ako sa wisyo!" I was afraid of what would be the consequences of that statement. Peace, Mish! :p

On route back to Mall of Asia, at the final 2 kilometers of the race, we spotted a famous barefoot runner, running at the side of the street. Barefoot Loyce. And so two became three, pushing each other on the final stretch of the race.

We crossed the finish line together, ecstatic to have finished strong and injury-free. We congratulated each other as we wore our finisher medals proudly. We conquered the Milo Marathon!

After saying our goodbyes, met runner friends from Team Titans at Fitness First. I felt sore all over, and I had to do some stretching. I was feeling a slight pain on my left foot, but I knew it was not a bad injury, just something I needed to rest.

The race was definitely the biggest race I've participated in this year - with a reported 42,000+ runners! Can you just imagine that? But since it was handled by Runrio, it was as perfect as it could be.
- Hydration was overflowing, ice-cold water and ice-cold Gatorade.
- Bananas and sponges for marathon runners were abundant
- So love the Milo jingle playing at certain parts of the race route. Not sure with the others but that jingle definitely gave me the boost!
- Mentioned this at the start but I wish Photo-Ops could have covered the event. The quality of their photos is just top-notch, and would have complemented one of the best and biggest marathon events of the country.

Plotted our race performance and what I got is on the below photo. Don't remember what happened in KM22 which slowed us down that significantly, an extended chat while walking perhaps. Obviously, a positive split but way better than my previous positive-split marathons as far as the deviation of speed is concerned. 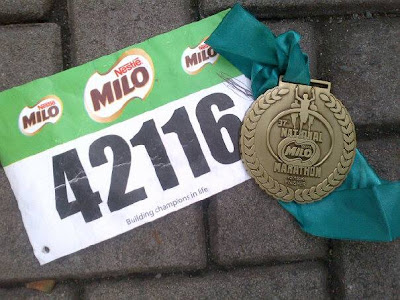 First ever marathon pacer duty's a success! RUPM you're next!