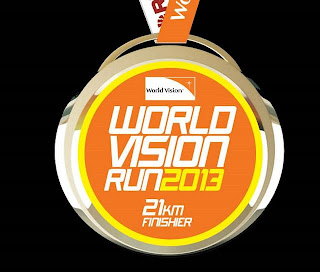 Summer season is officially over! The rainy season is here, and with it, the dreaded bed weather. I became a victim of this bed weather on yesterday's race. My sleep was so deep I did not even hear my mobile phone alarm (or I might have turned it off while sleeping). Good thing my running buddy Ryan gave me a call at 2:30am (and I was supposed to wake up 1am due to my pre-race rituals).

I had a very light breakfast, a quick shower and then prepared my running gear (and after race clothes). I left the house at around 3:30am and arrived 30 minutes later at BGC. Surprisingly, no long queue yet on the parking lot and I secured a nice spot which was very near the starting line. Fortunate as well that the race gun start is 4:30am and not the usual 4:00am so I still had time to apply Bodivance on my legs, take my Roctane, and do a quick pee break.

21k runners were greeted with a rather weird pre-race warm-up (it was more of a dance than the normal stretching). And then we were sent off. Usual running buddies Rom and Ryan were with me for another sub-2 attempt. Mindset today is I'll continue running if they can't follow my pace anymore.

The weather was cool - perfect for an early Sunday morning long run. I knew I was in condition to perform a sub-2, and I promised not to look at my GPS watch until the race is over (just to surprise myself).

Ryan told us to go on at KM2, when he experienced a bad case of side stitch. I left Rom at around KM8; he was out of breath and was not able to keep up with the pace. And so I was left alone.

I then spotted Ceej of Team Titans while running in Buendia flyover. Instead of being a pacer, I now told myself Ceej is now my "unofficial" pacer. I kept a distance from him but followed his lead. This strategy worked well for me, as Ceej pushed me without him knowing it. When Ceej increased his pace at the final 3 kilometers of the race and I couldn't catch up with him already, I turned to JP (again of Team Titans) and assigned him the task of my new, unofficial pacer.

I finished with a time of 1 hour, 57 minutes and 48 seconds. My Soleus GPS watch registered 21.8km. I read from other 21k runners that they registered longer distances as well, even stretching to 22.5km! Well, I don't mind the longer distance anyway.

I could not find any fault again on this race (even the weather cooperated). It was what every runner usually expects from a Runrio-organized event:
- Cold and overflowing hydration
- Secured race village and well-manned race route
- Organized baggage counters
- A nice 21k finisher medal

If there's one thing I would just like to suggest though, is getting rid of separate race kit claiming. I'd prefer receiving my race kit as soon as I register. Last June 21 (Friday), I left Paranaque just to go to BGC and claim my race kit and then back to work from home. I had to fight through Friday heavy traffic and the hassles of a rainy day. But since this race was opened for registration rather late, I understand some resulting logistics issues.

Enough of the chit-chat! On to my fave part - the event photos!


Plotted my pace - I'm very happy with my performance! Fastest kilometer at KM2 (4:56) and slowest at KM4 (6:00). My pace was almost steady throughout the race! 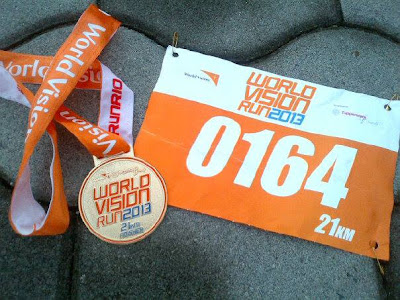 Runner 0164 conquered another 21k at the World Vision Run! Congratulations to Runrio, World Vision and Tupperware Philippines for staging another successful race event!

Posted by deemenrunner at 4:15 AM