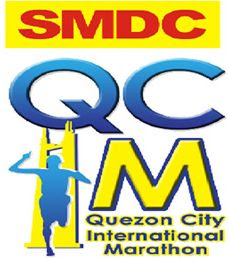 After eight 21-km runs this year, I finally managed to shatter my previous personal record of 2 hours 6 minutes and 55 seconds last Condura Skyway Marathon 2010 --- IN A SUB-2 FINISH!

It all happened the morning of Sunday, December 4, at the QCIM running event.

The week before, the anxiety and pressure was a bit overwhelming. I was still hesitant to attempt running a sub-2 half-marathon, with my fastest performance this year only at 2:12:14 (back in CamSur). It didn't help either that I had Saturday work scheduled, with my normal race-mode weekend sleeping pattern altered. I was already at the McKinley office 7pm Saturday, and worked the entire night until 3am in the morning. I brought a pillow with me, in high hopes I could at least insert an hour or two of sleep. I had zero.

Good thing it was an almost-perfect execution of work activities, which i only presume was a precursor of (positive) things to come. So with high hopes, I geared-up, left the office, and drove to Quezon City. 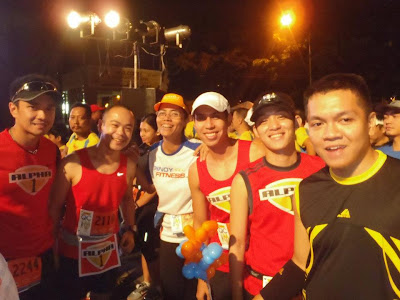 FFS, Rocknrolly, Ms Mars of PF, Me, Rocky, Armbanded
It was Bryan (FFS) who planted the idea of the sub-2 21k attempt to the Team Alpha1 members who haven't done a sub-2 yet. Since we had back-to-back 21k races (QCIM and Milo) this December, we still have another shot at Milo if ever we miss doing it in QCIM. A good plan. But it's the executing part that worries me.

Bryan and Rolly were kind enough to offer sub-2 pacer duties to TA1. I know that I perform better on races when someone else is giving me the push. This time, with no sleep at all, I will be relying on another thing to give me a different kind of kick - GU Roctane energy gels. This is the first time I'll try these. Desperate times call for desperate measures. Haha!

During the first few kilometers, I had difficulty with my breathing. I could barely talk. When FFS talks to me, I reply with a simple nod. After 5-6 kilometers of warm-up, I was able to pick-up the pace though. I think it was Roctane doing its job by that time. I was becoming hyper. FFS would occasionally remind me to reserve energy for the last 5 kilometers. Thanks to him, I was able to control my energy reserves for later.

By kilometer 16, FFS told me we were a bit off-track, and that he needs to slow down due to cramps (tsk, tsk, alcohol intake). He let me go, with a final advice that I should maintain the pace. And with that, I was alone.

The rolling hills of Commonwealth Avenue were now taking its toll on my body. I then did what was the only logical thing to do at that time: PRAY. I sought strength, I sought endurance. I had no GPS watch so I had no idea what my pace was. I just kept going, and gave it my all. Upon sight of the Quezon Memorial, it dawned to me that the finish line is drawing near. As I entered the memorial circle curve on that final stretch, I kept asking myself "Did I make it?" 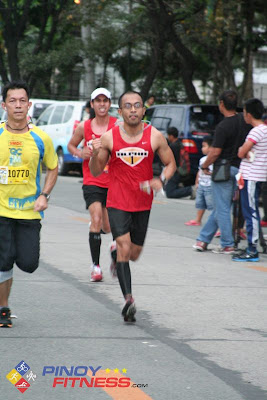 Eugene made me sprint!

YES I DID! The time I looked at the digital timer, it read 1:59:04. Everything went like a blur after. Eugene was at the finish line and congratulated me, but I still could not believe it. When Bry arrived, I gave him the thumbs up and he understood. I saw how proud he was with my achievement, but I was more proud to share this achievement with my entire team. 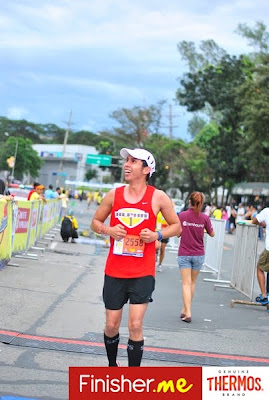 QCIM not only marks my first sub-2, but also the first full marathon of our teammate Marvin (Martian). Jesy (Sprintingswine) was his pacer. 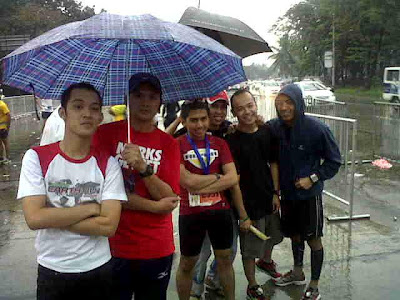 Waiting in the rain for our marathon finishers! 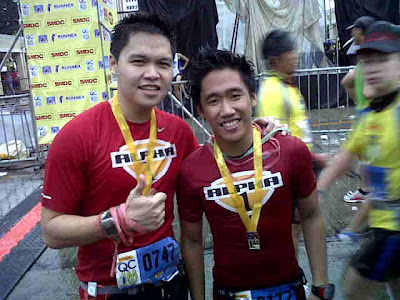 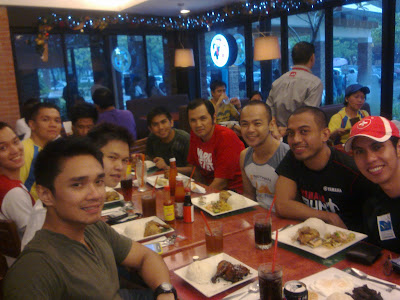 Post-race breakfast at Max's
The results were released 2 days after. My official time is 1 hour, 58 minutes and 51 seconds. I ran my fastest pace at the final kilometers of the race. 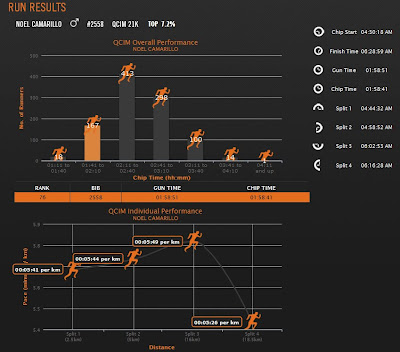 Race Results
Thanks to QCIM! This definitely will be one of my most memorable race. But according to Coach Bry, I should not stop here and continue to strive for improvement. Time to focus now on my running form. On to the next challenge!
Posted by deemenrunner at 11:32 PM