Fresh from my QCIM sub-2 ecstasy, never did I expect out-performing the PR that I have set there, not a week after. But I did! And until now, it surprises me so.

I've joined the 34th Milo Marathon last year, participating in the 10k category. This year, on the event's 35th anniversary, I wanted to get my hands on the 21k finisher's medal, so I registered early to secure a slot. A cut-off time of 2 hours and 30 minutes will be imposed for runners wishing to get a medal, an additional motivation to do well on the race.

Bryan FFS that my legs should now be accustomed to the sub-2 pace, so he's pressuring me to do another sub-2. I'm not sure if I could pull it off but since running in Mall of Asia and Roxas Boulevard is running mostly on flat terrain, I told myself I'd give it a shot.

By the early morning of December 11, I did my pre-race routine: wake up at 1am, have peanut butter sandwich, banana and coffee breakfast, have a quick shower, and don my running gear. I wore the Milo-provided green singlet since I thought it was a requirement to wear it during the race, but I still brought my lucky red Nike Team Alpha1 singlet, just in case. When I found out that my teammates were all wearing their TA1 tops, I ditched the Milo singlet and changed to Alpha-mode.

My game plan is to follow FFS' pace and see until what point I could survive doing his pace. During the start of the race, we were also pacing with Beeps and Kampuger of Team Power Puff Boys. Unlike my QCIM race start wherein I could not even talk, this time I noticed I'm much more relaxed and I could converse with FFS while doing a 5:10 min/km pace! I also tried forefoot strike and FFS noticed an improvement on my running form.

Well, that was until about kilometer 14. That time, FFS told me I'm losing my form. I was already tired and I could already feel the pain of blisters on my feet. I can also feel my calves were giving up, even though I was wearing compression socks. I had no choice but to go back to heel strike.

At kilometer 16, FFS told me to go ahead and run at my own pace. Below picture was taken by Ms Mars of Pinoyfitness after I passed the final flyover on my way back to MoA. 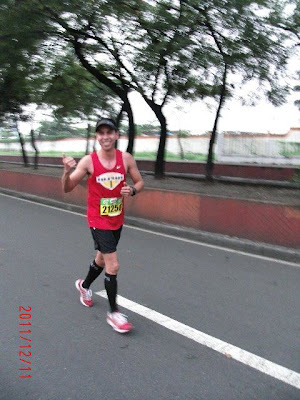 Photo courtesy of Ms Mars of PF
At the kilometer-19 hydration station, I stopped to take a sip of water. During this break, i walked and told myself I don't want to run anymore. I think it was more mental exhaustion than physical. Then I heard someone shouting behind my back. "Go, go, go!!!" It was FFS, urging me to run. It was as if I had an invisible arm pushing me to move forward. So I ran and did not stop for the final 3 kilometers. 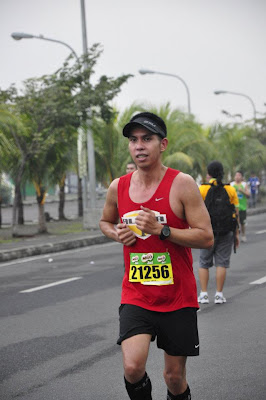 Almost at the finish line!
I clocked in at 1 hour, 51 minutes and 19 seconds. Another new personal best. 5 seconds later, FFS arrived in the finish line and congratulated me. Coach Bry, you're the best! 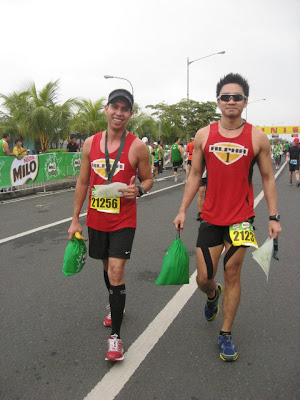 With medals and loot bags at hand
After the race, my legs were so sore. My calves were literally screaming because of pain; I can't even walk right! I knew it would take some time for me to recover. But nothing, nothing could ever dampen my (running) spirit.

We had a quick change then went back to the finish line area to wait for our TA1 marathon qualifiers (and my idols) - Jayson, Jualyn, Chad and Eugene. How I wish someday I could qualify just like they did. 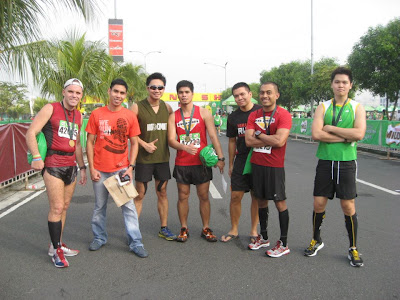 Chad, Deemen, FFS, Pandesalrunner, Armbanded, Eugenator, Sprintingswine
It was my first time to use my recently purchased Soleus GPS watch on a running event. I plotted my per kilometer performance. I did my fastest pace on two kilometers: kilometer 4 and (surprise, surprise!) kilometer 21! 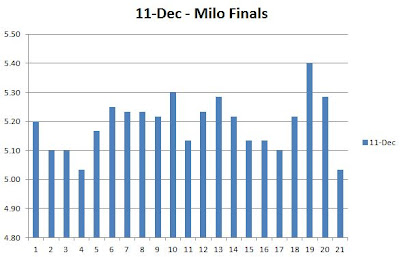 Excel geek
Three days later the official results were released. I placed 71st out of 1480 21k runners. That's top 4.8% of the population. And this being the Milo Marathon event is quite something. 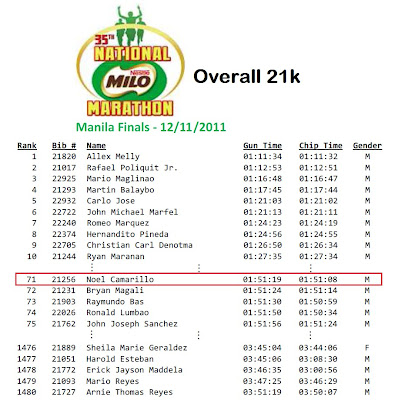 Success!!!
Indeed, "great things start from small beginnings." Thanks Milo and Runrio for one of 2011's best running events.
Posted by deemenrunner at 6:24 PM