The University of the Philippines Engineering Student Council (ESC), in celebration of 100 years of the College of Engineering existence, organized a running event entitled Eng'gfinity: The Engineering Centennial Run. Me and my HP running mates (and fellow UP graduates) immediately signed-up. We were all excited since this is the first running event we've participated in to be held at the UP campus.

July 18, 2010 - Race day. I woke up early since I knew it was gonna be a long drive from Paranaque to Quezon City. I picked up Mils and Dada from their condo unit in Mandaluyong around 430am. We arrived at UP Diliman 5am, just in time for us to get our race kits and put on our Eng'gfinity singlets. Here's our running group showing-off our bright orange tops: 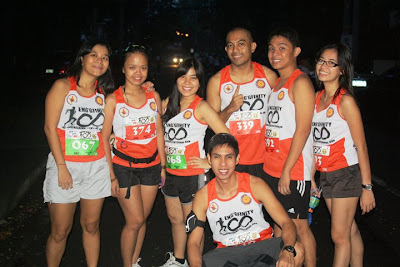 Another thing that made us excited to join this race is that it boasts of being the first in the country to use the RFID tag (that's Radio-frequency Identification for techies and geeks, hehe!). Runrio will just be introducing the D-tag, a similar timing technology, on the upcoming Rexona Run this August. I heard the RFID reader program to be used for this race was developed by some fellow UP students. I bet in a few months' time they'll be rich.
Here's how the RFID tag looks like when worn. It's just a strip of paper with an embedded chip - a lot more environment-friendly than the usual plastic timing chip. 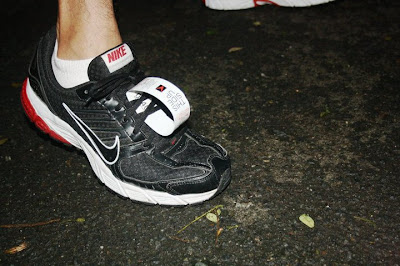 Gun-start was supposed to happen at 530am, but since there were still a lot of people claiming their race kits, it was delayed by 30 minutes. It didn't matter though because the weather was perfect. Me, together with the other 10k runners, were first off (accompanied by a light drizzle). I was targetting a sub-55 this time.
The race route was simple - from the starting line in front of the Engineering building, we move counter-clockwise around the acad oval, until the Biology Pavilion intersection where we turn right and run along the back of Palma Hall all the way to the College of Architecture. Runners would then head to the Oblation area and race a short stretch of the University Avenue, then make a U-turn back to the oval. Upon reaching the starting line, that marks 5km. 10k runners just need to do another loop to complete the course.
Now here's where the race got ruined for a lot of runners (and me, almost): during the first loop, instead of leading 10k runners to go straight ahead and head back to the starting line, the race marshalls directed runners to turn right at once at the Biology Pavilion intersection. That means missing 2.2km of the course! Runners who did not time themselves were misled that they had new personal bests. A fellow HP runner, Ronnel Go, placed third but honestly admitted to the race committee that he missed that 2.2km as well. As for me, I was also misled by the race marshalls. During my second loop however, realizing my time was too fast and that the route was somewhat short, instead of stepping on the finish line mat, i still did another loop at the acad oval, completing my 10k.

Another race gimmick is a real-time reporting of all runners' actual race time. You just have to be in close proximity to the RFID reader near the finish line computer terminal and voila, your race bib number, name and chip time appear in an instant. Mine was 54 minutes and 29 seconds. Target met!

After the race, we took the opportunity to do a cam-whore session near the UP Oblation.
Of course, the superposition shot: 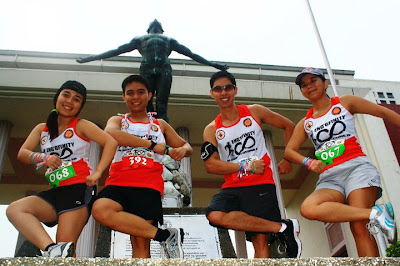 And the jump shot! 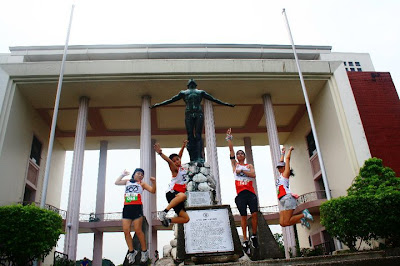 Congratulations to ESC for this well-organized, successful event. To Eng'gfinity, and beyond!
Posted by deemenrunner at 3:31 AM