Me and my running friends were part of the early birds who registered for the takbo.ph Runfest last April. It was announced at an earlier date that only 3000 slots were available and lucky registrants would have their own personalized takbo.ph singlets, delivered right at their doorsteps! I opted to join the 5k race category (5k and 10k were the only two options).

My race kit arrived two weeks before the actual race day. I tried the singlet on and I was not that satisfied with its length (I got used to the perfect fit of Runrio singlets), that I ran to the nearest Alter Station and had the length adjusted. I also had the big "Universidad" logo removed from the lower left part of the singlet. After the alterations, I wore the singlet again, highly-contented.

July 25, 2010 - Early birds we were in registering, and early birds we were again during the race day. We arrived before 5am, but there were already a lot of runners at the area. I regularly visit the takbo.ph forum and post comments there every now and then. I was excited to see a number of forum members in the vicinity, but didn't actually have the guts to approach anyone. The introvert Noel got the best of me. >.<

I was able to get a quick chat with the man who started it all, Jinoe Gavan, as busy as he was with the race preps. Jinoe was my batchmate way back from my Intel employment days, and I'm still in awe at how big his influence became on the Philippine running community, with a simple idea of introducing a catchy website - takbo.ph. I didn't miss the opportunity of having our picture taken with the soon-to-be parents. Congratulations to ManokanRunner and ChicksNiManok! 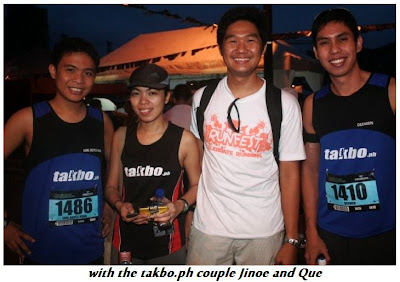 The race program started 530am. What made the event even more special is the participation of online running celebrities. The program kicked-off with the national anthem performed by the Running Diva. The warm-up stretch was then led by none other than Kikayrunner herself, Noelle De Guzman.
10k runners were first to head-off at 6am and 5k runners, fifteen minutes after. It was cloudy and it looked like it was gonna rain anytime, but there's nothing a prayer from thousands of runners couldn't do; it became another rain-free event.
I ran on my normal pace now, and back to my old, competitive self. I've now put my recent injury behind me, and just wanted to run a good race. I can never say anything bad about the race route, with a lot of marshalls along the way cheering runners on, good traffic control, and overflowing water and Powerade at the hydration stations. Purrr-fect!

During the final kilometer stretch, there's this grandpa runner who ran beside me, and told me he wanted to pace with me. It turned out I was the one who followed his fast pace! He was one talkative lolo and his statements didn't help my ego either: "Ang bagal ko ngayon, nakainom ako kagabi," and "Usually tinatapos ko ang 5k route ng 22 minutes." Nevertheless, I was glad to pace with him, and it helped me realize I still have a lot of training to do to bring out my full running potential. I found out that lolo was just a bandit runner when he said he wouldn't run with me to the finish line. 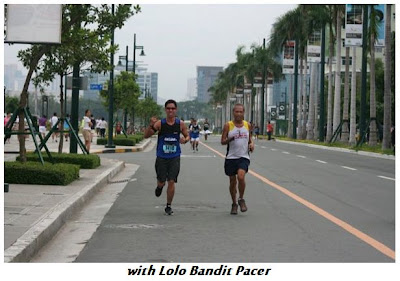 I knew I had a good race time when I stepped on the finish line mat; there were still only a few runners at the race village. I noticed someone was at the first-aid station and was surprised to see a medic putting on a bandage on Noelle's wounded knee. I asked her what happened and she told me she fell during the race, but it's nothing serious. I then asked her what her 5k time was. "24 minutes," she replied. Talk about getting an injury and still finishing that strong. Woah! 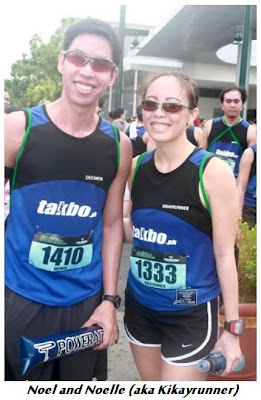 We had our group pic taken after everyone finished. We were surprised to see our officemate Chaniel; he was the only one who ran 10k. 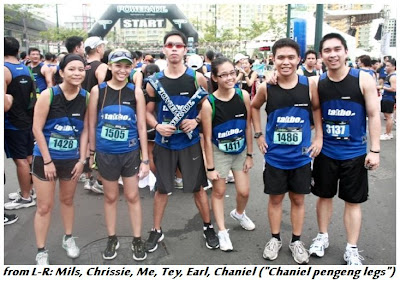 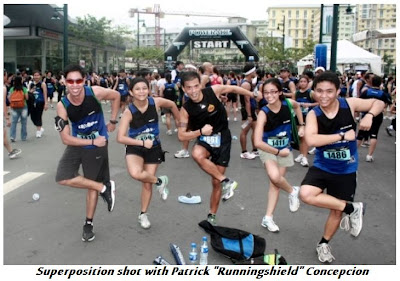 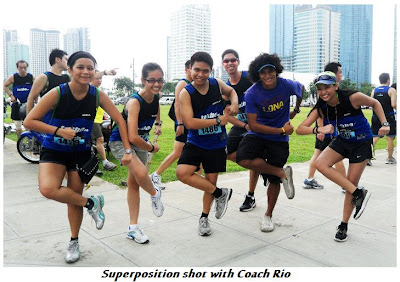 The icing on the cake? With manual timing done, the race results were released the following day! Can you believe that? (ACE Hardware, can you read this?) My time was 26 minutes and 42 seconds (A personal best!). I placed 46th out of 1092 5k runners, which translates to me being on the top 5%. I'm on the first page of the race results! Yay!

I'm definitely looking forward to next year's anniversary run. Congratulations to the race organizers! Two thumbs up!
Posted by deemenrunner at 6:54 PM