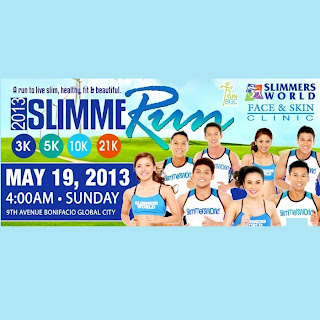 It's normal for runners to complain if race events only offer water and not energy drinks. This time it's different. Slimmerun 2013 did not have any water on the hydration stations. Vitwater (that pink variant) was offered instead (take note: warm Vitwater). On a particularly hot summer day wherein runners are used to pouring cold water on their heads to lower their body temperature, it was tough for me to adjust to new hydration and water-less stations. To add insult to injury, when I asked one of the marshals manning the hydration station if there's any water available, I got the response "Tubig din po yan." I just continued running since I might regret what comes out next on my mouth. Haha!

Flashback a bit, I registered for Slimmerun since it's one of the only few races this May that offered 21k. RU2 is just around the corner and I needed mileage badly. I was hesitant because there's not much hype on this event, with very poor marketing and a very late publication of the race route. If you read comments on blogs and social media sites requesting for race information, zero response was received from the organizers.

Desperate for mileage, Slimmerun is a go. Plan is to complete 25k - pre-race of 4k and race 21k. I brought my hydration bottle with me just to be sure.

Another confusing part of the race is its 21k route. Instead of the usual routes covering 21k straightforward, the Slimmerun has a section wherein you need to do a loop. It was weird, and mentally challenging - as you near the finish area, you need to take a u-turn and go back to Bonifacio High Street, then re-trace the path you took going to the finish line. Saw a lot of confused runners due to this and there might have been runners who made a shortcut accidentally if they missed the crucial turns.

Some other race observations and feedback:
- Hydration station between the 14km-15km mark ran out of Vitwater at the early part of the race. It was a busy section of the route as all categories are passing by so Vitwater supply at that area should have been planned better. At this part, I just gave up on my attempt to even get a decent time on the race as I was afraid of getting dehydrated. I slowed down and alternated walks until the next hydration station which was another kilometer or two.
- Since there were really no announcements made by the organizers if there will be finisher medals, shirts or loot bags in store for runners, it was bit of a surprise when 21k runners were greeted at the finish line with a medal and a loot bag. I guess it's a plus (shrugs).
- From a runner I follow in Twitter: @jpnavarrete Slimmers is all biceps, and no brains. Worst run ever!
- From a runner friend Mark Labit: He posted a picture in Facebook with the following caption: "Expired freebie in a recently concluded fun run." A box of C-Lium Fiber in the loot bag had an expiration date of January 2012. Wow! 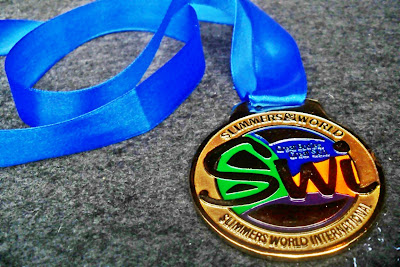 Slimmer's World International and Slimmerun, you better shape up next year or else you're gonna lose more runners! (As if today's race had lots, hehe!)
Posted by deemenrunner at 3:28 PM