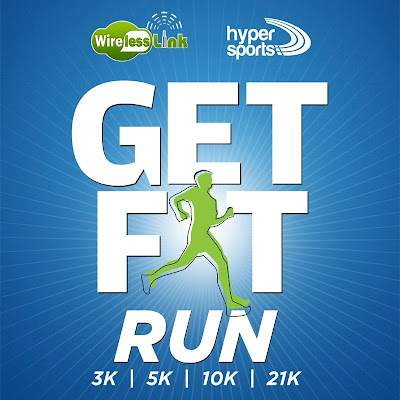 I normally lower my expectations for races handled by new race organizers. HyperSports Get Fit Run was an event which exceeded most of my expectations. And I podium'ed - most number of photos in an event. Haha!

I had zero mileage for two weeks (not even a recovery run) post-KL full marathon. My teammate Daves informed me a few days before that he was going to register, so I asked him to sign me up too. This was going to be another LSD and I'll just pace with him on this one.

July 8, 2012 - After receiving some instructions from Daves on where to park my car, I was there at Quirino Grandstand, with a good number of fellow runners. The gunstart was delayed a bit, preempted by an otherwise long, aerobic exercises. And then the 21k runners were off.

2 hours and 25 minutes later, we arrived at the finish line and because of the scorching heat, we opted not to do an extended run anymore.

RACE OBSERVATIONS:
- Route was distance-accurate and challenging, and a bit modified from the normal 21k route in Roxas Boulevard. I love the part when we passed by MoA Arena. I just wish photographers were there to take pictures of runners with the Arena in the background (should have been a picture-perfect moment).
- Hydration was overflowing, with sports drinks as an option
- Pleasant surprise: I like the 21k finisher medal! It's one of my favorites from my collection.
- The finisher shirt design's cool as well, with a pseudo-pinned-bib print.

Posted by deemenrunner at 5:28 PM