I Raced at BDO Race4Life

There were a lot of choices of race events last March 25 - FIC Run in BGC, Tupperware Run in ASEANA, BDO Race4Life in Mall of Asia, and for those with extra cash to spare for travel, Globe Run4Home in Cebu. I chose to run in BDO Race4Life since it offered the longest distance category among the Metro Manila races - 15k.

Knowing this is BDO's first attempt to sponsor and organize a race, I didn't have high expectations. BDO is affiliated with SM and for some reason, I kept having weird flashbacks of my abysmal experience at the ACE Hardware Run last 2010.

Registration Process:
- I did the online registration at the BDO website. Payment was manual though and I had to go to a BDO branch to deposit my registration fee payment.

Race Kit Claiming:
- All registered runners had to go to the BDO Corporate Center building at Makati Avenue to claim their kits from March 16 to 18, grouped by the first letter of runners' surnames. My specific claiming date was March 18, a Sunday. I had to find time to go there just to claim my kit, which I think is quite a hassle. The wait time was quite long too. Fortunately, the queue for 15k is not as long as the other distance categories. Later on I found out that there's an onsite claiming of kits. Bummer.

Race Day:
Race Likes:
- First 100 runners for 15k and 10k as well as the first 50 runners from 5k and 3k crossing the finishline will get a finisher's medal - I like this concept, but just because I'm quite competitive on races. Before the race started, I saw a number of elite runners and runners from the military. I knew my chances on grabbing a medal were slim, but there's no harm in trying.
- The race village was already active before the start of the race - runners can already go around and get freebies and get sample drinks and food from the different booths. (The only downside here is if runners consume something that might upset their stomach during their respective runs. :p)

Improvement Areas:
- Gun Start delay: We found out gun start for all categories was delayed for 30 minutes. It was for safety purposes, but still a short-notice announcement.
- Inadequate hydration on merge areas of all race categories: Along Roxas Boulevard, on our way back to Mall of Asia, there were hydration stations that no longer have any water or sports drink. We had to run another couple of kilometers to be able to hydrate. If I remember it correctly, this was in front of CCP. It didn't help either that the marshals in this area don't seem to care at all.
- Short route for 15k: My GPS watch registered 13.9kms only. I found out later the organizers had to change the route again for safety reasons. Pity to those running to beat their PRs as the distance is a bogus.
- Longest queue for a sports drink: The line just to get a small bottle of Pocari is the longest line ever. Runners from all categories had to muster all the patience they have before being able to hydrate. They could have just included the drink in the finisher's kit claiming booths as these were separated by category anyway.
_____________________________________________
I ran at the event with fellow blogger Roland aka Speedy of Team Titans. Our goal was simple: make it to the top 100 15k finishers, or die trying. LOL!

We started fast (sub-5 pace) which was our biggest mistake. We didn't agree on who would pace who, so we were sort of competing with each other, and got burnt-out at the latter part of the race. Before the major U-turn at Roxas Boulevard (km8), I was able to count how many 15k runners were ahead of us. We were runners #67 and #68, which gave me a bit of hope. However, with the lack of hydration on water stations (and our wrong fast-paced start), our legs became heavier, so we had to insert short walks. I lost count of 15k runners overtaking us left and right, but there were quite a few.

During the final 3 kilometers, another 15k runner asked me if he could pace with us the rest of the race. Not wanting to disappoint this runner, I agreed and with whatever energy left in me, kept running a steady pace until the finish line. With a marshal taking down the bib numbers of runners crossing the finish line, we can't help but laugh at our ranking - #98, 99 and 100! Crazy luck! 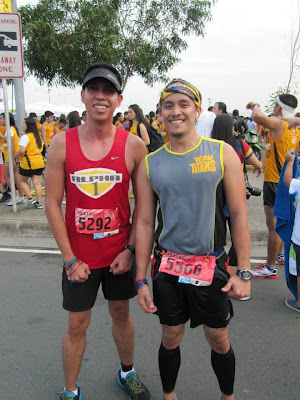 Me and Roland taken just after crossing the finish line - I'm as red as my singlet! 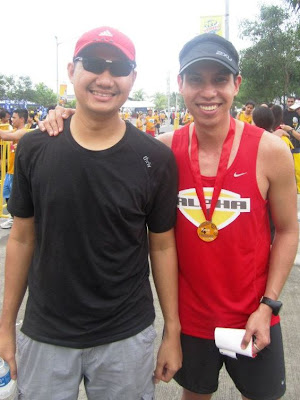 Mr. Takbo.ph Jinoe and me had a quick catch-up chat - they were handling the manual timing of the race event 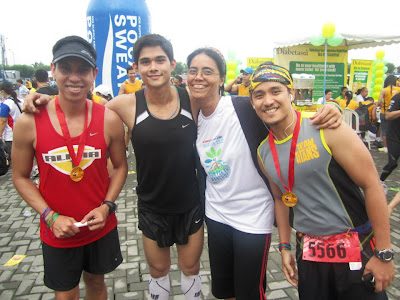 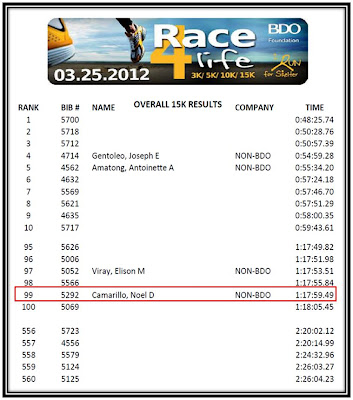 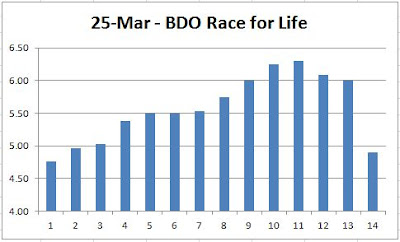 Race performance - positive split! :(
Overall it was not a bad experience for me (I probably got pacified when I made it to the top 100, hehe!). BDO Race4Life could definitely improve, should they choose to organize another race next year.
Posted by deemenrunner at 3:50 AM