I have waited a long time to blog about my first full marathon. I don't know why the inspiration of writing never came to me after that big Singapore event. Maybe I was too preoccupied with my Europe business travel that time. Maybe I was dreading the running hiatus that I knew would come because of work. Or maybe I was just too damn disappointed of the race result that I didn't want to share the experience anymore. But frustrations need to be set aside. Now that I'm back to running, I realized I've got nothing to be ashamed of. Finishing a full marathon is an achievement, with only a percent of the world's population being able to successfully accomplish. So now with a fresh outlook, I'd like to share my first full marathon experience, and attempt to recount those days of December 2010 when I finally became a marathoner.

The race kit collection for international registrants was one of the most organized I've seen. The buildup of excitement was tremendous as I first held my race singlet and personalized race bib. 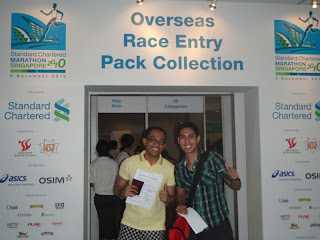 Eugene and I at the race kit collection entrance - look at those excited faces! 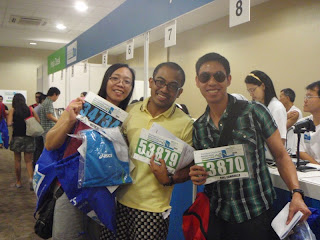 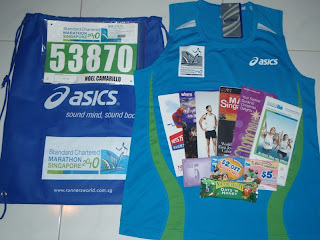 After two days of enjoying the city, the big day has finally come - December 5, 2010, race day! I've had very little sleep, what with the anxiety and the excitement and all other thoughts running through my head. Am I really prepared for this? 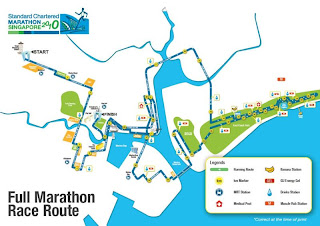 Eugene and I arrived at the Orchard, the starting point for the full marathon, 2 hours before gun start. Everything seems to be well-set, and as runners filled-up the road, the anticipation grew until that much-awaited countdown to race start. 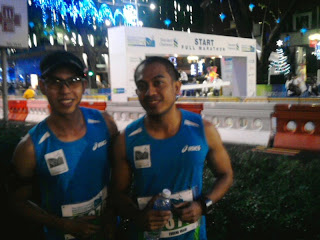 Early birds at the starting arch 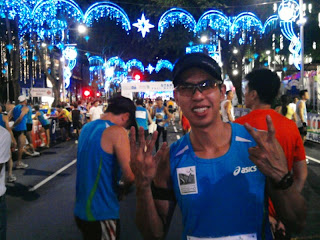 I ran. I was intimidated by this massive number of runners from all over the world who traveled all the way to Singapore to join in this race, but I tried to keep up. I told Eugene to go ahead at the early part of the race because I could not keep up with his pace. I felt alone but still determined to do what I can to finish strong.

From one kilometer marker to the next, I felt like its going to take ages before I could get to the finish line. Race marshals and volunteers cheer runners on, which helped a bit in boosting up my energy. I was running like I ran my first half-marathon at the Condura Run - the adrenaline rush kept me on. By kilometer 21, I even beat my personal best by a couple of minutes.

But by kilometer 22, the unexpected happened - I hit the wall. 10 kilometers early than the normal. I was anticipating that dreaded wall to come in at least by kilometer 32, but it struck way earlier and it struck hard. My legs felt like lead. I started walking and I felt defeated as race marshals shouted "Keep on running!" I realized the lack of sleep has come to get me, and there were even times when I had my eyes closed while walking, psyching myself that those are power naps that would give me some quick energy boosts. But I knew I was just fooling myself. Runners were overtaking left and right, and I was left in the company of walkers.

Every now and then I'd attempt to run a few meters, looking at my watch and seeing how far I am now deviating from my original 4-hour goal (which was supposed to be still achievable at kilometer 21). There were a lot of muscle rub stations along the way, and I'd cover my legs with the ointment, making it numb from pain and buying me a few minutes of running until the ointment's effects wear-off. There were Gu energy gel and banana stations too, and I'd consume them to help me move on. It was becoming a tough mental game, and as the Singapore heat made its presence felt by kilometer 30, I just knew finishing this race will just become more difficult.

Runners on the sidewalk stopping because of cramps, runners limping, runners who fainted and on stretchers who won't be making it to the finish line - I witnessed all of these. Those images were definitely downers, but I continued. As kilometer 35 arrived, I knew I can finish this race, not with the results I was hoping for but finishing nonetheless.

During the last 2 kilometers I was just numb, but I realized in a few minutes the finish line will be in sight. And as I finally crossed it, came the sweet, sweet victory of conquering my longest race so far. It was over. I am a marathoner. 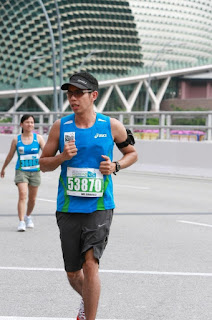 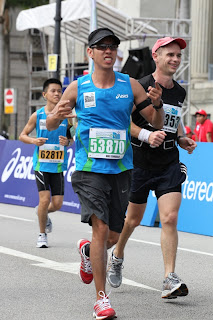 I don't know how that guy beside me could still smile. I couldn't. 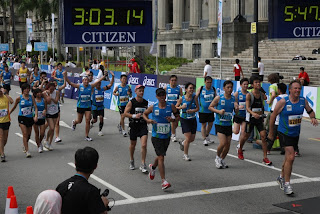 I clocked in at 5 hours, 47 minutes and 57 seconds. I was disappointed with the results at first, but when the Runpix analysis was released, I realized I didn't do bad at all.

As you can see from the Runpix performance graph below, I was at my best pace during the first 20 kilometers, doing a 10 kph pace. The big drop occurred post-20k, going down 40% of the original pace because I mostly did a walk-run at the latter half. 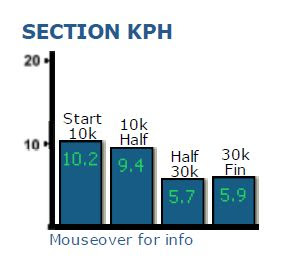 I'm on the top 35% of all marathon runners. The hot weather that day really kept everyone slow. 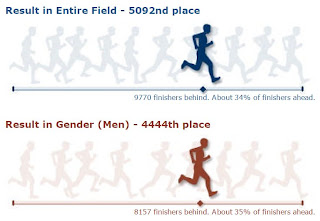 If there's something I learned from this experience, it's that I need to train harder next time. Running 42.195 kilometers is no joke, and it's definitely not your normal 21-kilometer race time multiplied by two.

Posted by deemenrunner at 4:17 AM