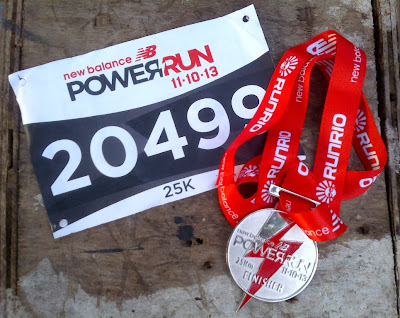 The last 25km race I joined in was the New Balance Power Run 2011, where I got a decent 2:36 finish time. Since the 25km distance would seem an annual thing only, I was really eyeing for a new PR. Days before the race, I was psyching myself up. I really wanted a new PR just before the year ends (on whatever category I could manage), and this looked like the perfect opportunity on doing so.

Recent events brought about by typhoon Yolanda threatened this year's race. It even affected the race kit claiming a few days prior. I remember running in strong rains on NB Power Run's 2011 edition, making me wonder what's with this event and the outpour.

We were fortunate the race pushed through. The gun start's back to the normal time - 4:30am for the 25km category, which is just right and not too early in my opinion. Starting line is at 30th Street corner 9th avenue, a new location to start a race. I parked at the back of Seda Hotel which is strategically near the assembly area. I had to wait for a few friends who asked to leave their belongings at my car - Ryan, Rom, Joshua, Jake and Rhon. Just in time, the light rain stopped when we were off to the assembly area.

No pacer duties this time for me. It's run-your-own-pace day so mindset's I'm running alone. I was feeling good so it's a good sign that I'll enjoy the race and be able to meet my target, which is a sub-2:30.

However, a few kilometers into the race, I came across Team Alpha1 teammate Joric (Redcapguy) so I called him up to greet him. Surprisingly, he told me he's not on race mode and that this is his first 25km race anyway so I had instant company (and an instant pacer too!). The only problem is that his relaxed mode (also known as chika pace) is sort of my race mode already. Haha! So when he was talking, and I was talking back, he didn't know I was already beginning to go out of breath and every reply already was an effort for me.

I quite struggled on the latter half of the race, requesting for more frequent walk breaks and longer stops at the hydration stations. Joric didn't mind the breaks but I still tried to push whenever I can. It didn't help either that lower race categories were merging with the 25k runners - the 10k and 16k runners were just a tad too many. Then again, I realized how Joric's unofficial pacing helped me continue to run, whereas if I had been alone, I would have just walked and gave up on my PR target.

And so as we turned the final turn to the finish line, I was ecstatic to see the timer displaying 2 hours and 25 minutes! It was a new personal best, slashing off about 9 minutes from my previous time. Woot!

Of course, it was now time to meet runner friends at the activity area. So I took the camera from my car after we got our loot, and went to the race village to take some snaps.

I was famished and craving for some IHOP goodness. IHOP was just a few steps away from the race area so it was expected a long queue would meet us. We were 20th on queue, but patience has its rewards - I really enjoyed my hash brown stack with mushroom, spinach and egg. Yummm! 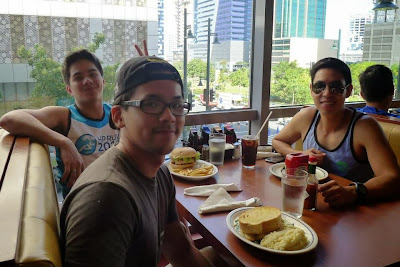 After breakfast, on our way back to the car, we met Coach Rio and congratulated him on staging another EXCELLENT race...

Until next year!
Posted by deemenrunner at 3:37 AM