Kings of the Road (For a Day) 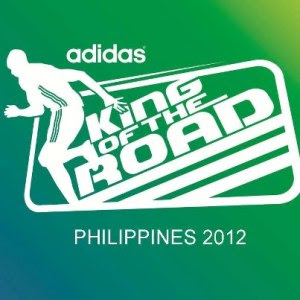 Whew! 3 weeks, no blog posts! Schedule's been crazy these past few weeks. But since I don't want to miss blogging actual race experiences, it's better late than never.

Last September 30, it was KOTR time again (my 2nd time to run this event). I was hoping for a 21k distance same as last year's but I settled for the longest distance they offered this time - 16.8k. Nursing a bad case of colds for the past few days, I knew I had to take it easy during the run. I had my office mate Rom as my running buddy this time. Plan is a 6 minute per kilometer pace to get a decent finish (That's roughly an hour and forty minutes finish time).

At the Buendia flyover, we caught up Titan Ryan. And then there were three.

Within the final 5 kilometers, Rom was already doing run-walk intervals. We would lose him for some time, and then he's back again beside us running (which I think eventually burnt him out). The final kilometer, Rom asked us to go ahead. And so three became two. Haha!

We finished 1:45:07; Rom arrived at the finish line a few minutes later. Rom had to cool down a bit in the medical tent as he was on overheat.

Some race observations:
- Event stage setup was grand! I also like how they setup the race village in the parking lot. (However, it was more difficult to find parking space as they took up the space of runners' usual parking).
- 16.8k gun start was late by 10 minutes.
- Scary incident at KM7 - we witnessed a number of runners assisting a fellow runner who was unconscious and had hit his head (I'm scared of blood so I only took a quick glance). Runners passing by were shouting for medical assistance. I don't know if there were any official statements released from the race organizer regarding the condition of this runner. Hopefully he is ok.
- Hydration was ok, but I remember during the event launch it was announced that Powerade is the official hydration partner. No Powerade during the actual run.
- Queue at the finisher's area was a disaster. It was sooooo long, I actually saw some foreigners looking at the queue in disbelief and just leaving without claiming their loot bag.
- Medal design is very similar to last year.
- Race results were released fast! The day after the event, official results were available for download.

Hope Adidas changes the theme next year, and offers something new to the runners.
Posted by deemenrunner at 3:06 PM